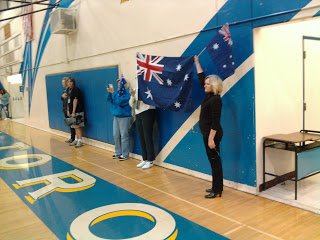 The National Antherm is played before the game. Two of the Aussie player’s moms hold their flag while the Australia Antherm was played by a horn musician. 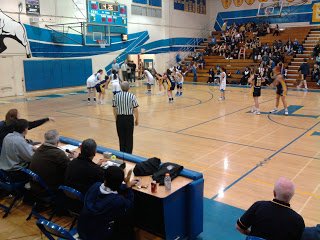 #12 for Box Hill, Ashleigh Borthwick, at the foul line early in the game.

Girls basketball spans the globe, as Orange County was host to an international match up Wednesday night.

El Toro High School of Lake Forest hosted Box Hill Secondary College of Melbourne, Australia. (They are a high school team with a college name). Box Hill is currently ranked one of the top teams in Australia, and have two teams visiting the USA. There is another Box Hill team in Northern California that will play in some tournaments later this week. I believe the elite players for Box Hill were on that team.

Though El Toro won 63-40, Box Hill played hard throughtout the game. El Toro’s press caused many turnovers, which was the main reason for the point differential. Both teams seemed to enjoy the game, and the they had a pretty good crowd turn out. 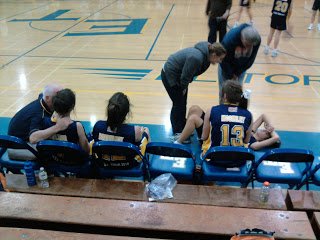 Half time and one of the Box Hill players takes a rest, on the floor. 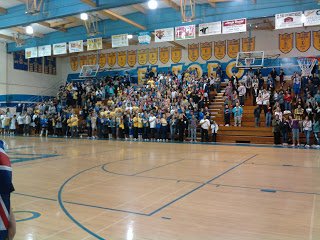 The crowd was pretty good size. There was a boys game afterwards with a boys Box Hill team playing the El Toro boys team. There was also a JV game before the girls varsity game. 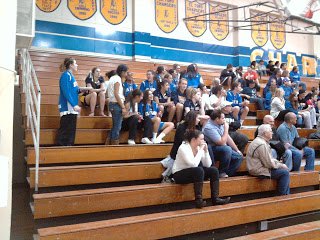 After the game the Box Hill Girls(dark blue and white shirts) and the El Toro Girls(lighter blue shirts) co-mingled and watched the guys play.