It’s a new era for Stanford, who has had to share their spot atop the Pac-12 Conference the last few years, after owning it for more than a decade.

Last season they tied for third in the conference and didn’t play for the tournament title for the first time in many years. Two other Pac-12 teams went to the Final Four besides them.

Top reserves Brittany McPhee, a junior guard, and Alanna Smith, a sophomore forward, are also back.

An all-star recruiting class will join this tight contingent. DiJonai Carrington of California was the seventh-ranked guard in the 2016 class, while Florida native Nadia Fingall was ranked seventh at the forward position. Anna Wilson of Bellevue, Wash. was the 12th-ranked point guard, and Canadian Mikaela Brewer was ranked 51st at wing.

Tara VanDerveer, who enters her 31st season at Cardinal head coach, has already seen growth from 2015-2016.

“Last year we had a very young group and I was really proud of their improvement. This year maybe the expectations are a little bit higher, but in fairness to all of our players, this is a new team,” she said. “What we’re hoping for, number one, is that we stay healthy. That will give us the best chance to be successful.”

“So far I’ve been very impressed with the camaraderie and energy in the gym – how hard people are working and how well they’re playing together. We have so many talented players and I think what I’m seeing that I’m really liking is that the upperclassmen are helping our freshmen a lot. We are going to get great contributions from our freshmen, but it just might take them a little while to learn the system.”

“In the meantime, we have excellent leadership with Erica McCall, Karlie Samuelson, Kaylee Johnson, Bri Roberson and Brittany McPhee. Those are our five upperclassmen that are really leading the way in practice. They know what it takes so they’re really helping the younger players get up to speed.”

McCall, in particular has grown her game at a phenomenal pace during her Stanford tenure.

“The thing that helped her the most [heading into the last season] was her confidence,” VanDerveer said. “By making the USA team [for the World University Games], she developed confidence in her outside game.”

“What I’m seeing that she’s doing so much better is that she’s really scoring around the basket and using her body to get in deep and finish at the rim. It will take more than just one person playing really well, but it’s also other people recognizing that she wants the ball in deep and getting her the ball – passing it inside. I think a lot of our success will be our ability to move the ball, share the ball and find the open player.”

“We want to be a multi-dimensional, multi-attack team so it’s not just Erica [McCall] and it’s not just Karlie [Samuelson] out there, but you’ve got four and five different weapons on the floor at all times.”

VanDerveer said Samuelson’s basketball IQ is what helps her to be great.

“Karlie’s 3-point shooting is phenomenal, but she’s a very smart player also,” VanDerveer said. “She knows you just can’t stand out there and shoot threes, so she’s working on her ball handling, putting the ball on the floor, working on her passing, finishing, posting up, getting to the free throw line and defense.”

“I think that her leadership is really key for our team’s success. She’s vocal and she’s a very intelligent player. I really think Karlie, somewhere down the road, is going to have to coach basketball. She sees things before they happen.”

Defense will continue to be key for Stanford, according to VanDerveer. And they will experiment.

“I think our team really worked hard defensively [last season]. We play scouting report defense and our team locks in to ‘this is what we’re going to do and how we’re going to play.'” she said. “Maybe we can play some different defenses and have a little bit more variety this year. We played 99 percent player-to-player defense last season, and maybe this year we can throw in a little zone, press and trap a little bit. We’re experimenting with doing some different things.”

“Obviously the same blockers are there. [McCall] and Kaylee [Johnson] are still there and we’ve really improved our inside presence with Shannon Coffee healthy, Alanna Smith is a year older and we’ve got Nadia Fingall, who I think is going to make her name by being a shot blocker and physical presence inside.”

Though the Cardinal made it to the round of Eight last season, the ever-competitive VanDerveer is not satisfied.

“We’re going to work hard to win the conference, and we’re very excited about our chances, but we’re really interested in going a long way in the NCAA Tournament,” she said. “We were very pleased to go to the Elite Eight last season.”

“I think there’s still a little bit of a bitter taste in not going to the Final Four and knowing that we had beaten two teams that went to the Final Four. We know we can compete with the best. It’s a matter of staying healthy and working really hard to improve every day.”

Stanford will take on Texas, Gonzaga, Purdue, Tennessee and George Washington in preconference play before traveling to Arizona in late December to begin Pac-12 competition. 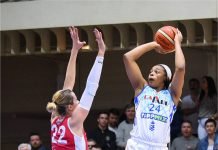 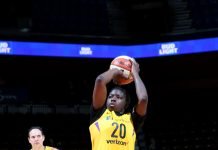 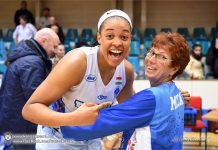 Having a great time in St. Louis