Well, season two of overseas basketball is almost a wrap, and I am blessed to say I am feeling much-improved, culturally-adapted, and most importantly, healthy.

When I last wrote about my overseas experience at the end of my first season in Szekszárd, Hungary, I self-titled my journey “the season of growth.” Now about to finish out my second season with the same team, the best way to title this year would be “the season of comfort.”

When I was first deciding whether or not I would return to Hungary, my initial thought process was all about the money. (I only signed my contract for a season, so at the end of the year I had to the option to return to my team under another year contract or play elsewhere.) I was analyzing the numbers and calculating if my team, or another competing team, could best satisfy my monetary wishes. However, I knew I needed to think more deeply, and I knew that money isn’t always everything.

Since playing overseas, I’ve heard of some terrible situations between players and their teams. In particular, players that were making close to millions of dollars, but were absolutely miserable during their time playing. So miserable that they wanted to leave in the middle of the season, or didn’t want to return after the season was over.

I know right now I’m not a million dollar player, but it just shows that no matter how much money you make, your happiness and mental health can always be in danger if you are constantly living in a negative situation.

After considering those stories, I remembered that my first season could be deemed as fairly rare in the overseas basketball world. I liked playing for my coach, enjoyed playing and hanging out with my teammates, lived in a calm and safe city, and played for a professional club that paid my salary on time. I knew my situation was hard to come by. Combining the financial, basketball, and social benefits of playing in Szekszard, I came to the conclusion that returning was in my best interest; and as my dad says, “if it ain’t broke, don’t fix it.”

Although I enjoyed living and playing in Hungary my first season, I still wanted some changes to my living conditions that would make my second season there even more enjoyable. The first thing on the list was an automatic car. Although I got used to walking around my town and even took pleasure in at times, I knew being able to transport myself comfortably throughout the town and other regions of Hungary would allow me to view more of the beautiful country that I considered a second home.

Next on the list was a larger living area. Last year I lived in a dorm-like studio apartment that included a decent-sized bedroom, a small bathroom, and a small kitchenette with no oven and a half working refrigerator/freezer. I really had no complaints because I was just happy I was living by myself. But after seeing some of my other teammates’ apartments, I knew I could have a more convenient living arrangement for the following season.

Today I live in a great apartment and drive a brand new Suzuki SUV. My car has truly changed the way I live overseas. I am so appreciative of her. Yes, you read that right. It’s a girl. Her name is Penny because she has a beautiful bronze color, like a penny. She has allowed me to go to places I could only imagine going last year. With my car, I have been able to easily go see other friends play, explore Budapest (a 1.5 hour drive), go to the movies in the next town, hang out with my team more, and I could finally give my teammates rides. Having a car has changed my experience here for the better, and I am so thankful for it.

Along with Penny, my apartment has also benefited my living experience. I reside in a nice-sized apartment that includes a bedroom, a living room, a bigger bathroom with a bathtub, and a bigger kitchen with an oven. I have so much more room to invite company over, and a larger cooking space to cook more sophisticated meals. I even had my teammates over for Thanksgiving dinner. Looking back at my first season, I’m actually really happy that I had a more modest living experience, because it has allowed me to appreciate even more the amazing new accommodations and amenities that I have today.

Another part of my experience here that has made overseas living quite comfortable has been becoming close to teammates that I now consider great friends. Last year I enjoyed my team and got along with everyone, but being the only American, it was difficult to get close to others because there were a lot of cliques that spoke other languages I couldn’t understand. This year I am still the only American on my team, however all the other foreigners can only speak English to communicate with each other. As opposed to last year, all the Hungarians could speak to each other and the three other foreigners, who were also from Eastern Europe, could speak Serbian amongst themselves, which left me stuck on my phone playing candy crush. Now we have foreigners from Sweden, Croatia, and Australia, so English must be the language of communication.

Thankfully I can talk with others more, therefore in return, I enjoy more of their company. Last year I didn’t have anyone I was close to who I could hang out with outside of team activities. This year I’ve become close to a few teammates. Whenever I’m bored or want to go out and travel the country, I know I can ask these teammates, and they’ll always want to join the adventure. Manty and Iva are my closest friends on the team. We often go out to eat after practices and games, visit nearby cities, or just enjoy conversation over coffee or tea. Having teammates like them has made living in Hungary an even more homey experience, and I am so blessed to go through this season with them.

Living in the city and communicating with the locals has also become a lot easier this year. My Hungarian has improved greatly, and many people are often surprised by my knowledge. Thanks to my teammates I have mastered my numbers, colors, some greetings, and a few words about food that has helped me drastically in ordering food on my own. Most locals have also become even more friendly with me this year. My “mama and papa” I have adopted out here have really taken me in as their own, and often bring me food and medicine whenever I am under the weather.

The fans are still very energetic and lively as usual and they truly support our team and will fight anyone who is against us – literally. As far as the other locals who are still not quite used to seeing a black person in their town, I’m giving them the benefit of the doubt and saying they are staring less. However, I can’t decide if people are staring less or if I am so accustomed to my environment that I don’t notice it anymore. Once, as my teammate and I walked down the street, she said she noticed multiple people looking at me as we passed by. However I was completely oblivious of it and wasn’t affected at all. At the beginning of last year I definitely couldn’t say the same, and can admit I was very uncomfortable. But now, whether others are staring or not, I don’t care anymore because I know this is where I am supposed to be, and I’m going to be proud in my own skin – no matter who’s looking.

Returning to the same team was a great advantage for me in terms of adjustment. I didn’t have to adapt to a new system or coaching style, and most of my teammates also returned from the previous year. Last year, it took me almost a month to figure out the system and playing style of overseas basketball, which in my opinion is more physical than American basketball. There were some nights when I just stayed up confused and frustrated because I couldn’t fathom how I could struggle so much at something I’ve been doing almost my whole life.

This season it was a whole new story. Compared to my first year, I was far more consistent statistically, and generally felt more comfortable on the court – especially in high-pressure games. In every game this season, I scored in double-digits and even went perfect from the field in one game. It is something that might not mean much to others, but I take pride in this. I know this is a huge sign of improvement, not only with my basketball skills but also my confidence. Without those days of struggle, I would not be as strong, focused, or successful as I am today.

Although basketball went consistently well for me this season, my body, on the other hand, went through some ups and downs. This year I experienced the pain of a strained calf, a bad ankle sprain, a hyperextended knee, the flu, and a stomach virus. My body has never endured this much pain or sickness before. And though it was really tough on me physically, it was even more so mentally. I was forced to miss practices and games, which was difficult for me to accept because I knew I couldn’t help my team on the court. I also had some anxiety about getting out of shape or losing my touch with my skills if I sat out for too long.

Trusting God that I would comeback just fine or even stronger after my injuries is what motivated me during those tough times. I really had to practice patience and create a positive mindset to not only allow my body to heal properly, but to also push me to be the best teammate I could be. Injuries are never fun, but with a good attitude and positivity, the pain is a lot easier to deal with. Thankfully, with great trainers, I am currently healthy and enjoying my time on the court with my team.

During the time I had a stomach virus, I was put in the hospital for safety reasons. Being in an international hospital for the first time was a bit frightening, and I was nervous about the language barrier and how differently the doctors operated than those in the States. But my nerves were quickly settled when they introduced me to an English-speaking nurse that explained the medicine I would be receiving during my stay. Throughout my overnight stay at the hospital, I was overwhelmed with so much love and support from my team. My coach came for an hour and checked in with me and the doctors to make sure I was treated properly, my assistant coach and president of the club cooked for me, and I received a slew of text messages from my teammates giving me well wishes as I gained my strength back. It was during that time that I knew my experience here was truly special.

The love and comfort I feel here is something many players dream about, and I am so blessed to be able to experience it everyday. I never thought I would call a foreign country my second home, but here I am writing this getting emotional about my time playing in the little city of Szekszárd, Hungary.

Basketball, you have allowed me to see some amazing places and meet some incredible people, and for that, I thank you.

Former Stanford standout Erica McCall is a forward for the Indiana Fever of the WNBA. 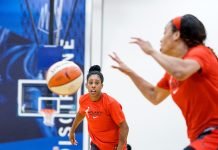 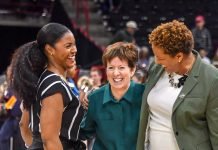 USA and Spain to face off for World Championship

Not too much evening news

Sparks rewrite the script to down Lynx and lead Finals series