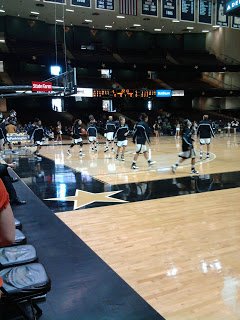 Vanderbilt in pre game warm ups. They had the band and about 50 cheerleaders at the game. 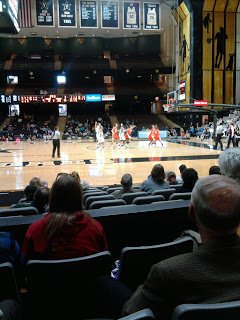 Princeton, in orange, boxing out late in the game.

The game was tied 35-35 at the half. However, USC held Quinnipiac to 24 second-half points to pull away for an easy win. USC had only nine turnovers for the game and dominated the boards. Quinnipiac had seven three-point baskets, but struggled with their inside game. USC goes on to play Xavier Thursday night in Ohio. 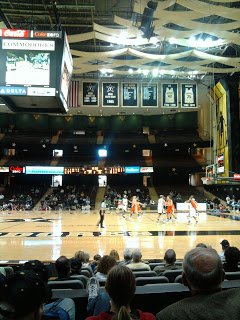 Vandy, in white, looking to set up a screen play.

Before I say anything about the game, Princeton is a good team. I read some forums where people was upset with USC’s loss, but it was not to a poor or fluky team. Yes USC will need to win these games, but Princeton could gave any team ranked about 15th or lower a solid game.

Princeton and Vanderbilt both play solid half-court offenses. Princeton has a three-point shooter named Micir who hit six three’s – all from behind the men’s line. She finshed with 20 points. Northern California sophomore Niveen Rasheed added 15 points.

For Vanderbilt, Southern California freshman Jasmine Lister had 15 points, and played a ton of minutes.

Vanderbilt led by three points at the end of a back-and-forth first half, 29-26. Vandy did open a 10- or 11-point second half lead, but Princeton fought back to trail by three points with just over a minute left. A three-pointer by Vandy and some foul shots sealed the victory at 74-68.

Admission was free on both days of the tournament and both days had about 3500-4000 fans show up.

– IM in Nashville (soon to be back in OC) 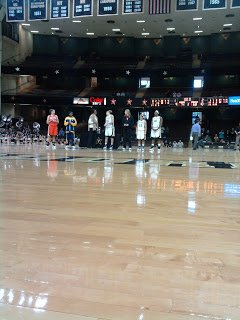 Tournament Awards Vanderbilt had Tuomi, MVP in white uniform #15, Jasmine Lister #11 in white uniform, and Tiffany Clarke #34 also for Vandy. Christina Marinacci in black warmups for USC, and Micir for Princeton #23 in orange uniform. Not sure of Quinnipac winner.

In other tournament wrap-ups, Cal won the Colliers International Classic by beating Portland State, 82-49. Southern California’s own Layshia Clarendon had 15 points, eight rebounds and seven assists in the win, and took the tournament’s MVP award.

The Ducks won the Oregon Invitational with a solid victory over Sacramento State, 110-60.