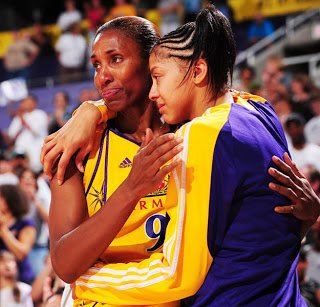 The Indiana Fever and their fans are feeling great about their Eastern Conference win last night. Big ups to not only the team for closing it out, but for my new favorite male basketball player, Larry Bird, for helping generate such a huge turnout at the game by purchasing so many tickets to give away. Freakin awesome.

Photos here, starting with an emotional Tamika Catchings pic. She is one of the main reasons I want the Fever to take the trophy. Such a great player and person.

In the West, it was the Mercury from beginning to end; they dominated the game. Sparks co-owner Kathy Goodman explains why she’s not reflective just yet, and Mechelle Voepel shouts out Lisa Leslie.

Photos here of the Western Conference finals, including the one above. That picture scares me, because I’ve never seen Candace Parker the iron woman in tears before, despite following her career from high school. I always figured it was because she grew up playing with boys that she’s always had the Tim Duncan no-expression game face – sometimes off the court, too. And in typical double-standard fashion, Parker has been criticized for that game face, with fans calling her “arrogant” and other names because she doesn’t smile all the time like a woman is supposed to. But in tears? The picture makes me sad. Here’s another one from the Associated Press that freaks me out even more:

They are not only tears of sadness but of frustration, knowing Parker and her high standards. The Sparks were never able to get on the same page this season, despite a galaxy full of potential. I wonder if Parker has ever had that experience before.

Leslie is sad because she’s just fouled out of her last professional game. I wonder what she’ll do career-wise after this.

Big big ups to Betty Lennox, who poured in another 19 points last night to cap off a great personal season that included overcoming an injury. She definitely silenced all her doubters this year.

This picture is a happy one. Catchings and Tully Bevilaqua are two of the absolute nicest players in the WNBA.

Ironies: Indiana’s Jessica Moore and Phoenix’ Temeka Johnson were cut and traded, respectively, by the Sparks within the last year. Now they’re playing for the WNBA title.

I know there’s still a title series to be played, but my mind is already on college and high school season.