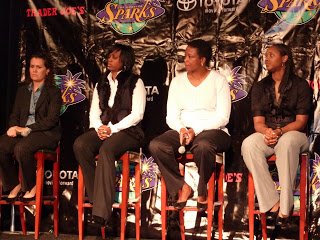 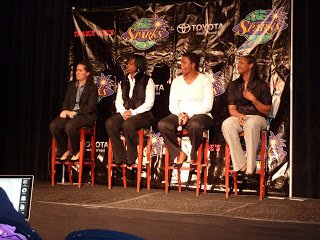 Los Angeles Sparks Launch “Get Outside & Play LA” Campaign in Partnership with Farmers Insurance, First 5 LA and the City of Carson

LOS ANGELES – In partnership with Farmers Insurance, First 5 LA and the City of Carson, the Los Angeles Sparks will introduce their “Get Outside & Play LA” campaign with the Sparks Sunset Showdown, the team’s first outdoor game in franchise history.

The Sparks Sunset Showdown will feature the Sparks and the Seattle Storm and will take place at The Home Depot Center in Carson on Saturday, June 5th at 8pm. The game will also be broadcast on Fox Sports West.

“Playing outside, beneath the stars will ensure an unforgettable evening for our players and fans,” said Sparks President Kristin Bernert. “But the game also provides a terrific opportunity for our athletes to inspire kids of all ages to lead healthier and more active lifestyles, which is the goal of our broader ‘Get Outside and Play LA’ campaign this summer.”

The “Get Outside & Play LA” campaign is built around events to promote health and wellness for the Los Angeles community. In addition to the outdoor game, the Sparks will also host a “Downtown Dribble” on July 3, a Sparks Fan Fest at the iconic outdoor mall, The Grove in Beverly Hills, and a series of clinics.

The signature event, the Sparks Sunset Showdown, played in The Home Depot Center’s state-of-the-art, 8,000 seat tennis stadium, will mark just the second time a WNBA game has been played outdoors. The game will feature a health and fitness expo, highlighting programs like First 5 LA that provides healthy start resources for children in the first five years of life. The night will also include a half-time performance by Zumba ®Fitness – a program that uses hypnotic Latin rhythms to get people physically active.

“We are looking forward to hosting our first-ever professional outdoor basketball game at The Home Depot Center in partnership with the Sparks and their ‘Get Outside & Play LA’ campaign,” said Katie Pandolfo, General Manager, The Home Depot Center. “We couldn’t be more proud to welcome some of the world’s greatest female athletes to Carson as we support the Sparks and their commitment to healthy living and fitness education in the Southern California community.”

The Downtown Dribble will take place on Saturday, July 3rd prior to the Sparks 2pm game at STAPLES Center against the Seattle Storm. Activities including “Dribble Tag,” a “Dribble-a-thon,” and a “Dribble Like The Pros” clinic will get hundreds of kids dribbling, with the proceeds from the event benefiting the Jenesse Center and their fight against domestic violence. Advance registration is $20 and participants will receive a t-shirt, basketball and game ticket to the Sparks game the same day courtesy of Farmers Insurance.

Lastly, the Sparks will hold a Sparks Fan Fest at the Grove in Beverly Hills on May 23rd that will include a chance to play and interact with the Sparks players. The Sparks will also host several outdoor clinics and workshops at recreation centers across the city of Los Angeles, and will be present for the City of Carson Health Fair on April 17th.

To learn more about any of these activities, please contact Alayne Ingram, Director of Communications at 213-929-1313, aingram@la-sparks.com or visit LASparks.com/getoutside.

Tickets to the Sparks Sunset Showdown at the Home Depot Center in Carson and all individual game tickets will go on sale on April 8 at 10am PT. You can reserve the best seats by becoming a Sparks season ticket holder.Call 1-877-44-SPARKS or visit www.LASparks.com for more information.

Here’s the extra, to go along with my pictures:

Sparks President Kristin Bernert opened the press conference by announcing the organization’s new program “Go outside and play, LA.” She cited the fact that obesity rates have tripled since the 1970’s, while TV viewing and computer use continue to increase. The Sparks will partner with the Los Angeles Unified School District and the Girls Scouts to promote physical activity all summer long. The idea was inspired by First Lady Michelle Obama’s campaign to promote exercise, Bernert said. The outdoor game is linked to the “go outside” idea.

Bernert, who came to came to the Sparks in October, 2008 after working in the WNBA League office for many years, told me after the press conference that she helped put together the first outdoor game in New York City that year, when the Liberty took on the Fever. Fan reaction was generally very positive, and the event was deemed a success. Bernert said she’s excited to be bringing the same type of event to LA.

The tennis stadium, where the game will be played, is a beautiful facility. It will be fun to see the Sparks and Storm play under the bright lights.

Thursday is the WNBA Draft, and the Sparks get the eighth pick to begin with. General Manager Penny Toler said that in the wake of Lisa Leslie’s retirement, the Sparks are building a new team.

Toler said with a smile that the Sparks will choose “whoever’s left on the board” when the eighth pick rolls around, which she characterized as a “no-brainer.”

She was cagey when asked what the team’s greatest needs are, saying that their “biggest need” was addressed with the acquisition of veteran point guard Ticha Penicheiro a couple months ago.

“If we can get good players, then we can win games, and our goal is to win a national championship,” Toler said.

New Coach Jennifer Gillom said she is bringing a philosophy to the team that blends old ways with new ways.

“(Former Coach Michael) Cooper’s focus was the half-court game, while with (Oregon Coach Paul) Westhead, you see a running game,” Gillom said. “We’ll be halfway between those two, with the emphasis being on an up-tempo style.”

Bernert said season ticket sales have been breaking even. She said team management was aware of the complaints of many season ticket holders last year that there weren’t enough fan events. This year, the Sparks will have more such events all season long, besides the ones that were annouced today. For example, there will be an open practice Friday, May 7, before the game the following day.