So many NCAA coaches. I counted representatives from almost 40 different schools, and I’m sure more came in at the end of the day for the late afternoon and evening games.

The marquee game of the morning was between two of the top teams in Southern California: Cal Sparks Gold and West Coast Premier Black. The Sparks have members from Long Beach Poly, Inglewood and Washington Prep. West Coast Premier has players from everywhere – Poly, Mater Dei, Beverly Hills, Ayala, Diamond Ranch, Colony and Santa Margarita, just to name a few.

The game was close until about the middle of the third, when Premier started pulling away. At least that’s what I was told, because I was going back and forth between that game and Cal Sparks Black vs. EBO Red.

Teams have come from throughout the LA metro area, San Diego, Fresno, Arizona, Roseville CA, and Ventura. I was there for a long time because it was so much fun to watch. There was so much talent on all four courts that it was hard to pull away. 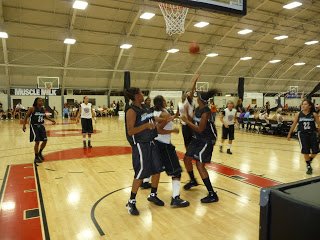 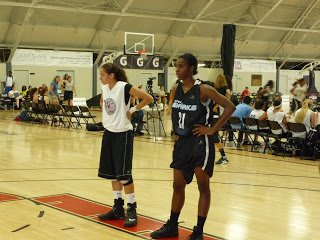 Super about-to-be-soph Jordan Adams (Mater Dei) left, and super about-to-be-junior Reshanda “Too Tall” Gray (Washington Prep) are two of the reasons the future of the game is so bright. 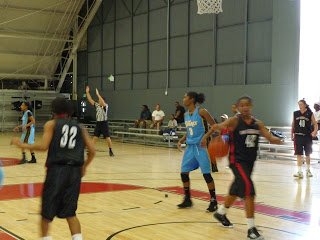 The referee signals a Cal Sparks Black (in light blue uniforms) three-pointer, as EBO goes to retrieve the ball. The Sparks lost, 39-37 in overtime. 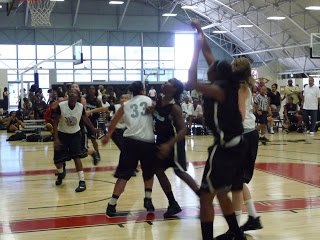 Cal Sparks Gold and West Premier Black battle it out under the hoop. 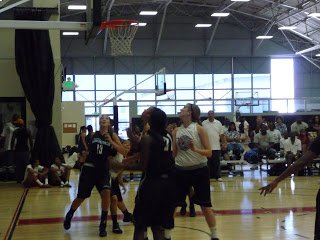 Each team played hard, but there was no dirty play on anyone’s part, which was impressive. 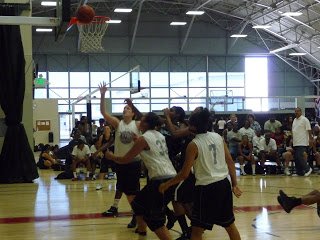 As previously mentioned in this space, most of the girls on these teams have had a brutal travel schedule so far this month, to hurry and “be seen” before the NCAA dead period July 16-21. I talked with one of the girls I know, who was still reeling from arriving back yesterday to turn around and do this tournament over the next two days. I told her to hang in there and remember she has days off coming up. And that when she is in college and doesn’t have to pay a dime for it, she’ll be glad. The guy sitting there taking tickets at the door smiled, nodded and said to her, “yup.” It’s a good lesson in life for the girls; sometimes you gotta just cram.