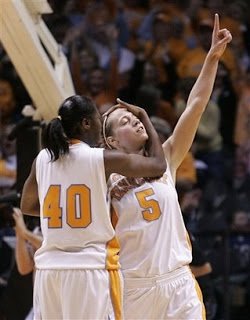 Shekinna Stricklen hugs Angie Bjorklund after her last-second 3 won the game for the Lady Vols, 60-59 over Mississippi.

I didn’t think I had much to worry about tonight with Tennessee hosting Mississippi, but I should have learned from previous games this season. The last minute of the game just about put me into cardiac arrest. But somehow, once Alex Fuller got that rebound, a calm settled over me. I knew they’d be OK.

Bjorklund’s three-pointer was so pretty. If I were at home I would have yelled, as usual, but I was in the gym sitting on a bike that I had grabbed for dear life. When the ball swished through the net I started saying thankyougodthankyouuniverseohmylord. And the guy next to me started a conversation. I’ve had more sports bonding moments in the gym with men over basketball games; it’s really funny.

And in the most surprising game of the night, unranked Georgia defeated fourth-ranked Auburn 67-58. Previously, the Tigers had been unbeaten.

UCLA put up a valiant fight for the first three-quarters of the game against Cal tonight before the Bears began to slip away. I was really impressed with the scrappy play of the Bruins. They are getting better with each game.