Emily Engstler’s layup at the buzzer lifted Syracuse over No. 8 Florida State, 90-89 in OT. It is the first loss of the season for the Seminoles.

Wake Forest defeated Duke, 60-58, on a last-second shot to snap a long losing streak against the Blue Devils.

UCLA could have the best start in program history after this weekend’s games.

Oregon State has sharpened its defense ahead of Pac-12 play.

Penn has begun the season with two wins.

Notre Dame is searching for confidence.

Amber Melgoza is scoring less and doing more for Washington, and they are the better for it.

Dor Saar has taken over the point guard position for Maine.

Arizona senior forward Tee Tee Starks had shoulder surgery today and is out for the season.

Mikayla Boykin returned to Duke tonight after being out for a year with injury.

Morgan Valley has quite a project with winless Hartford. 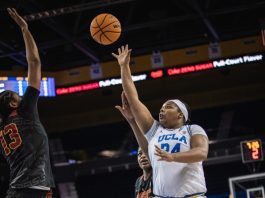 L’s And One: llmar’l Thomas’ cache of skills stabilizing UCLA

For once, the midweek game schedule is packed