The news began to break last night that legendary Tennessee coach Pat Summitt’s health had been declining over the past week. Hospice had been called in to the retirement home she had moved to in January, and family, friends and former players had begun to show up.

I was having a horrible deja vu moment, and people around me were puzzled at how Alzheimer’s Disease can kill a person. I realized that we are educated about the memory loss (early stage) part of the disease, but not about the final stages of this loathsome condition. I recently had a crash course on this subject myself.

It was April 26 when I got the call. An immediate family member with Alzheimer’s Disease had been almost 100 percent uncommunicative since January. In April this person stopped eating and drinking, and was losing weight. When the hands and feet began turning blue and blood pressure became elevated, they called us. My relative could die that night, the next night, or a week from that time, they said; they didn’t know. But hospice was called, as it was for Pat. Last night it was said Pat “might not make it through the night.” That’s what they told us too, about our relative.

Alzheimer’s begins by destroying memory, and it continues to short-circuit the switchboard of the brain until it gets to neurotransmitters that run major organs and bodily systems. When limbs turn blue and heart rate changes, that’s a sign that the circulatory system is being shut down. Alzheimer’s can close down any part of the brain, so final stage symptoms vary from person to person.

I’ve been told by reliable sources that Pat began declining shortly after her birthday, June 14. She’s been asleep for more than a week, but opened her eyes today. That indicates she will pass soon. But when is anyone’s guess.

The limbo period is torturous. On one hand, you don’t want your loved one to go. On the other hand, you want him or her to be at peace and free of suffering. And every single time your phone rings you hold your breath, because it could be that call.

The day my family member died – May 8 – my sweet nephews had come to visit. They leaned over the unconscious body and showered hugs and kisses. Four hours after they left, my relative died.

Family, friends and former players are making the trek one more time to see Pat Summitt – the woman who will never be replaced. I am wondering if she will have a similar exit to my family member, as there are spiritual realms that we don’t understand with the conscious mind.

Besides the personal deja vu, the other thing that has me reeling is how fast it all happened for our beloved Lady Vol coach. It was Aug. 23, 2011 when Pat told the world about her early-onset dementia diagnosis. Now here we are, less than five years later…..

Besides praying for Pat’s peaceful passage, I am also praying for the family, friends and athletes. Having to wait for that call is hellish.

Love and peace to all.

And on the seventh day, the court shook 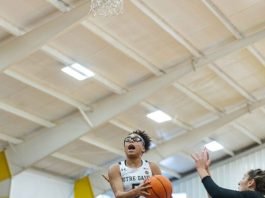