Senior Ariel Massengale, above, will lead the Lady Vols along with fellow seniors Isabelle Harrison and Cierra Burdick. Photo by Maria Cornelius

Each year, I check in with longtime scout.com Tennessee Lady Vols beat reporter Maria M. Cornelius for her insight on the team, and for her outlook on the pending season. As always, she provides excellent perspective.

Sue Favor: How have the Lady Vols looked in practice these first few weeks?

Maria Cornelius: The coaches repeatedly have talked about how vocal the point guards are – Ariel Massengale, Andraya Carter and Jordan Reynolds. That sets the tone for practice because their voices have to be heard. The three of them will have the ball in their hands a lot this season with clear instructions from the staff – get it up court in a hurry. Reynolds showed in the exhibition game that she doesn’t need to be told twice. The sophomore guard pushed tempo throughout the game and always had her eyes looking up court to find a basket in transition.

The post game looks different with the absence of 6-6 center Mercedes Russell, who will use a redshirt year to fully recover from surgery on both feet and get into Division I basketball shape after months of being sidelined.

The good news is Bashaara Graves is back in beast mode form. Nia Moore also is getting a lot of practice reps with Russell out – the Lady Vols rotate in and out – and with one less true big, there are just three of them to rotate into drills.

Izzy Harrison should be an SEC Player of the Year candidate. She does deal with some tendinitis in her knee – Harrison has missed games at Tennessee because of knee injuries – and sometimes needs a little rest at practice, but she is consistent inside and also has been cited for being much more vocal this season.

Sue Favor: This is Holly Warlick’s third year as head coach. How is she flowing and growing into the role?

Maria Cornelius: She seems more confident overall. I think it gets lost sometimes that Warlick dealt with the heavy emotional burden of her coach, mentor and mother-figure being diagnosed with early onset dementia. She never had time to adjust – she had to handle so much more responsibility and continue to recruit elite athletes. Tennessee’s recruiting in the post-Summitt era has been outstanding, and that is a reflection of the effort put in by Warlick and her staff.

I also think it helps that half of the roster committed to play for Warlick. Those players chose Tennessee knowing Summitt would not be the head coach. The loss of Summitt on the sideline was crushing for the players who signed with her and has weighed heavy on them. That weight has started to finally lift for them. Add to that a roster of players in the classes of 2013 and 2014 who said yes to Warlick, and it creates a better situation.

Sue Favor: Have the offensive and/or defensive strategies changed much this year?

Maria Cornelius: Help-side defense – and making sure the freshmen learn it early – has been emphasized. Also, movement on offense and getting shooters open are major points of emphasis. With less interior size this season but athletic and mobile players, the Lady Vols are likely to line up in more four-out, one-in looks.

Tennessee played its first exhibition last Sunday, and the Carson-Newman coach was asked how the Lady Vols are different this season. Coach Mike Mincey mentioned size. He didn’t mean inside. Tennessee added 6-2 wings in Jaime Nared and Kortney Dunbar. The 6-2 Jasmine Jones also plays on the perimeter, though she will get to the paint, as will Nared. Dunbar is a long ball specialist but has the size to get inside and is an outstanding free throw shooter.

Sue Favor: How are Cierra Burdick, Ariel Massengale and Isabelle Harrison going to lead this team? Who else is a leader?

Maria Cornelius: Carter and Reynolds immediately come to mind as other leaders. Both attended Point Guard College – Carter in Atlanta, Reynolds in Portland – over the summer. It shows in their confidence and willingness to use their voices. Po int guards are natural leaders so Massengale is a natural fit for that role. Harrison should provide steady guidance for the youngsters, and Burdick has the urgency of a senior. They know the clock is ticking.

Sue Favor: How will the absence of Mercedes Russell impact the Lady Vols this year?

Maria Cornelius: Huge loss of personnel, no pun intended. If Harrison or Graves get in foul trouble, Nia Moore is the lone true post on the bench. Moore, as Warlick noted, has been the team’s biggest cheerleader for two years. She now has the chance to step up and provide effective minutes in the paint. She has a fluid release and is a fundamentally sound free throw shooter. She scored 29 points in the exhibition opener, though it’s hard to get a good gauge on any post player against an overmatched team. But Moore can help Tennessee, and she should get an opportunity to do so this season.

Russell, while playing on two bad feet, was a defensive presence around the basket with soft hands on offense. She will be missed, but a year to work on strength and conditioning means a dominant player should emerge.

Sue Favor: What is the best attribute of each of the freshmen: Jamie Nared, Kortney Dunbar and Alexa Middleton?

Maria Cornelius: Kortney Dunbar can shoot the basketball. She is adjusting to the pace of college basketball – and that can take time – but with more game reps, she will get more comfortable. She was making one-handed threes in a recent practice without leaving her feet – just lining them up and hitting net. She has a fluid stroke and the size to post up smaller guards and not just rely on her long ball. She will have to get stronger to compete inside, but she has a solid frame.

Alexa Middleton is fearless. She broke her nose in practice in October and returned to the court to finish the session. She will shoot the ball without hesitation, and she is unselfish. She is always looking to get the ball inside and can make pinpoint passes to the post. She also is adjusting to the pace of the game, especially on defense.

A made basket by Tennessee means get back on defense, and all three freshmen slipped in the exhibition game. Middleton is a glue-type player, as close to former Lady Vol Kellie Jolly as I have ever seen – steady, dependable and will slice you up on the court, figuratively speaking, to win. She is the quintessential Pat Summitt player.

Jaime Nared has quiet confidence and is not the least bit homesick, even though home is across the country in Oregon. She has finesse around the basket – a good thing – but also a grit about her. She also can hit the three ball. Her attitude is one of a competitor, and she is always smiling, too.

Tennessee will have multiple threats from the arc. All three freshmen need to get up to speed as quickly as possible on defense, because they can help the Lady Vols on offense.

Sue Favor: How far will Tennessee go in the NCAA Tournament this year? What are reasonable expectations for fans?

Maria Cornelius: This is a great question!

I said all summer the team had question marks, with the first being health. The loss of Russell is a major blow to interior depth. Also, Massengale, who has looked very good in preseason, is coming back after missing the final two months of the season under the concussion protocol and then had clean-up knee surgery in the off-season. Will she be healthy all season?

Meighan Simmons was a proven scorer willing to take shots in big-time situations – that is very much a mind-set – and she has departed. Who will fill that void? The freshmen have tremendous potential, but they are freshmen, and a college season – especially the rugged SEC – can wear down a newcomer.

Tennessee lost last season in the Sweet 16. They return essentially the same team, minus Simmons and now Russell, too, with three freshmen who are unproven on the college level. A fourth newcomer, Jannah Tucker, is tremendously talented, but she had off-season microfracture surgery on the same knee (ACL) that she injured before her senior year of high school. She hasn’t played basketball in two years and is not yet cleared for contact.

So, how angry are the returning players about that loss? How much are they seeking redemption? If healthy, I think Tennessee can make the Elite Eight. Can the Lady Vols make that next leap to the Final Four? The potential is there, but a lot has to line up as far as health, attitude and leadership.

Maria Cornelius: So far, very good. Players have mentioned a certain joy, more smiles. My theory, as mentioned above, is that the program has carried a crushing emotional weight from the loss of Pat Summitt as head coach. That took a cumulative toll on everyone, coaches, staff and players. It was a brutal ending to such a storied career and seeing Summitt – a coach they worshipped – be sidelined by early onset dementia settled over them and hung like heavy fog. That has started to lift as players have come in knowing Summitt would not be on the sideline. They didn’t have the expectation to be coached by Summitt and the crushing disappointment of not having that happen.

I don’t think Warlick gets enough credit for how she steadied a ship that was rocked by the news of Summitt’s disease, while also being devastated herself. She assembled a great staff, recruited well and she connects very well with the players.

I like this team. They have tremendous potential. I am very curious to see who steps up for Tennessee. 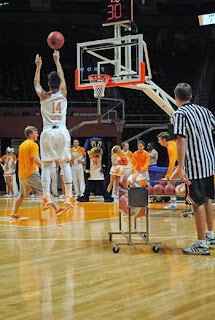 Redshirt sophomore Draya Carter launches a shot in a recent practice. She is expected to take the reins of leadership for the team, too. Photo by Maria Cornelius