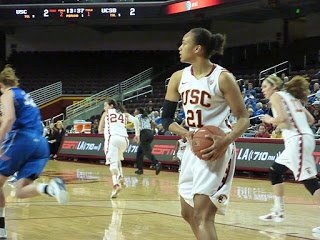 Freshman forward Alexyz Vaioletama grabs one of her team and game-high 15 rebounds in last night’s first half. 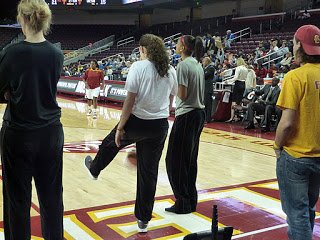 Jacki Gemelos, left, and Briana Gilbreath, who sustained a non-ACL knee injury last week. Gemelos grabbed a ball during second-half shoot-around and dribbled with it non-stop, while talking to Gilbreath.

Neither team shot well, and the Gauchos were at only 19 percent in the first half. Yet the Trojans lead by only six at the break. USC began the second period with a 15-1 run and lead comfortably most of the way, attaining an 18-point lead. UCSB began making baskets in the final two minutes of play, but it was too little too late.

– UCSB’s record isn’t for their lack of effort. I love their hustle and team communication. Coach Carlene Mitchell should be able to take them places.
– USC freshman Alexyz Vaioletama’s game has been coming along steadily all season. She was a monster last night on the boards, from the jump. She’s going to be a star if she keeps working….but I knew that the first time I saw her play in person, at Mater Dei three years ago this week.
– It was cool to see Jacki Gemelos walking around pretty well, sans crutches, two weeks out of knee surgery. She was dribbling at halftime.
– A lot of love between all the Trojans, whether they were on the bench or the court. All the smiles, pump-up talks, hand slaps and encouragement reminded me why I love women’s basketball.