The Trojans came in at 4-5, after losing two games by a total of three points on their recent road trip to Arkansas State and Texas A&M. Pepperdine was 5-5 entering the matinee, also losing its last two games, to Oregon State and UC Santa Barbara. This was USC’s first game since losing star guard Jacki Gemelos to another ACL injury Sunday during the TAMU game. Gemelos was at today’s contest to support her teammates. The Trojans now have eight healthy players.

The game went back and forth for most of the first half. Neither team had more than a five-point lead until late in the first half, when Pepperdine went up 40-30, but USC was able to narrow the lead to 42-35 at the half. The Waves hit an amazing 8 of 11 from outside the arc (72 percent), with Lauren Bell hitting for four three-pointers and 18 points in the period. Trojan scoring was spread out among several players, and all eight players played and contributed in the first half.

USC came out early for warmups for the second half. At eight minutes to go, the Women of Troy were on the court running drills. With about two minutes left, the team stopped their warmups and gathered under the basket. It looked like each player had something to say to pump the team up.

The Trojans then came out and scored the first 10 points of the second half to take a 45-42 lead. It also appeared they were taking their game inside, as forwards Cassie Harberts and Christina Marinacci were both posting up to take shots. Ashley Corral and Briana Gilbreath were both moving the ball inside (Gilbreath finished the game with nine assists).

The Waves were having difficulty defending Harberts, who finished with 23 points and nine rebounds. Stephanie Gilbreath played 27 minutes and had 10 points and seven rebounds, which was great to see after the injuries she has sustained. Pepperdine missed all nine three-point shots that they took. After USC’s initial run, the lead changed hands a few times, but neither team could open up a lead bigger than four points. Both the Trojans and Waves had a chance to win the game in the last 15 seconds, but both squads missed their shots.

Pepperdine scored the first two points of overtime and then couldn’t hit again until around 30 seconds left. The Trojans able to open up a five-point lead in the extra session, and were mostly able to keep that lead at two posessions. Harberts scored six points in the extra period.

Both teams will begin conference play next week, when they return from holiday break. 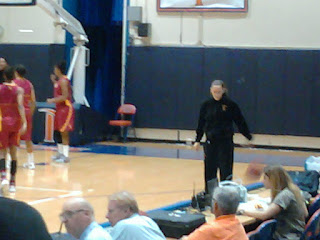 Jacki Gemelos dribbles the ball while her teammates shoot around before the game. 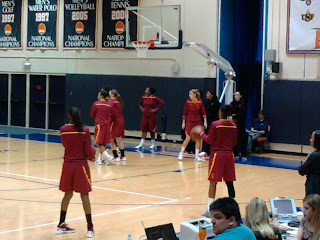 The Trojans run through warm ups. 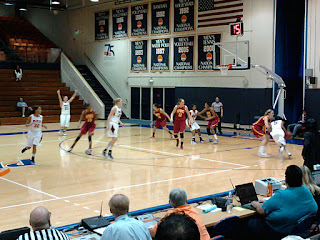 USC’s Christina Marinacci vs. Pepperdine’s Jazmine Jackson in the second half. 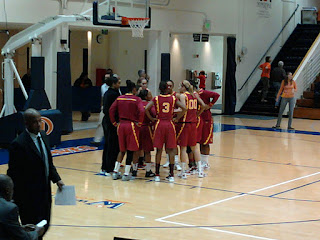 Just before the start of the second half, the Women of Troy called their own player’s meeting under the basket. There appeared to be a lot of tough talking in the huddle.

– Game report and all pictures by IM in OC