The Troy Warriors of Fullerton, Calif. are currently ranked #28 in the nation. With a 13-2 record, they’ve lost only to Long Beach Poly and Spring Valley – an east coast team they played in the Crescent Bank Holiday Invitational last month. Last night they defeated Inglewood, 57-38.

The Warriors aren’t big, but they’re fast and smart. Point guard Shelby Doughtery never has the ball for more than three dribbles before she rockets it off to a teammate. Then it’s cutting time for the entire offense. Briana Roberson is an effective scorer with her ability to penetrate.

Defensively, Troy is even more intense. Their full-court pressure D broke Inglewood’s concentration again and again. The Warriors are all in great shape, able to run the court with anyone on any possession.

If Troy doesn’t go far in the playoffs this year, I’ll be surprised.

Troy players box out completely in the second quarter.

Troy point guard Shelby Doughtery is very impressive: she bring the ball up the court quickly, gets rid of it, and also has a nice outside shot. She finished with 11 points on the night. 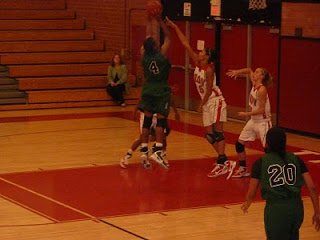 Inglewood’s DeAjanae Scurry puts up two in the third quarter. 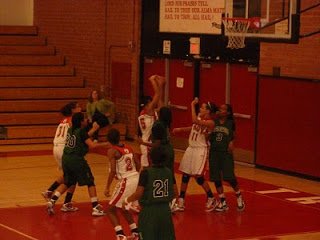 Esther Du grabs the board for Troy.