UCLA is off to a 4-0 start – their best in 24 years – after beating UC Davis today, 65-49. It was the first-ever meeting between the two teams, curiously.

The Bruins got off to a fast start. But the Aggies went on a run and caught up, thanks largely to Vicky Deely, who had five three-point shots as part of her total 21 – most of them in the first half. Then UCLA put their own pedal to the medal and went on a 13-0 run to put themselves up 32-21 at the half. They kept attacking in the second period, going on a 13-3 run to extend their lead.

UC Davis is a very disciplined team and they have great, disruptive defense. But in the end, UCLA had more depth. Jasmine Dixon, Doreena Campbell, Darxia Morris and Antonye Nyingifa were double-digit scorers, while only Deely and Paige Mintun went double on the other side.

The Bruins shot an impressive 54 percent for the game, but they had 29 turnovers – three less than the Aggies. UCLA also had only 36 rebounds.

Overall, however, the Bruins are improving each game, and they were playing more like a unit today. Coach Nikki Caldwell is correct in saying that her team plays in spurts. But they look closer to being able to play for a full 40 minutes (something Caldwell always wants) than they were at this time last year.

Hannah Stephens brings the ball up court as Doreena Campbell guards her.

Vicky Deely unleashes two of her 21 game points in the first half.

Darxia Morris for two in the second half. She had 14 for the day.

UCLA recruit Kacy Swain watches the game with her parents. Another Bruin signee – Moriah Foulk – was also in attendance (in the shorts two rows up). 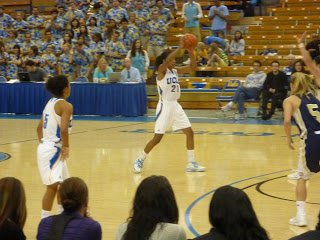 Late in the game, Williams had a beautiful behind-the-back pass to Nyingifa.

I could not be a coach on this team, as the shoe dress code is for one-foot heels. I would, however, gladly be a player for this team……those are some FLY ass kicks, in my brand.