I got there late, but Vanguard actually lead the game for a little bit at the beginning before the Bruins remembered who they were and began to crush them. I’m sure they’ll be catching the wrath of Coach Nikki Caldwell today for that.

Jasmine Dixon looks like she’s poised to have another great season, as she put up 23 points and pulled down 16 rebounds in 29 minutes of play. She has a way of being right under the basket at exactly the moments when her teammates need her to be there. She’s a strong player, and she’s fun to watch. I’m so happy she decided to come to UCLA.

Rebekah Gardner had 19 points and 13 boards in 25 minutes. She is really aggressive and I like the way she attacks the basket.

Darxia Morris (10 points, seven boards) traded off at the point with Doreena Campbell (nine points, six boards). Both have a different style, and if they continue to be used interchangeably, it could crate havoc for opponents. Morris has a nice shot that can be deadly, and Campbell is a terrific ball handler. Campbell is also continuing to be more vocal in the position, as she began to be at the end of last season.

Caldwell tried just about everyone at the point last night, but she should keep Morris and Campbell there during the regular season.

Nina Earl played some great defense, and Antonye Nyingifa seemed happy to be back, as she played well on both ends of the floor. Christina Nzekwe came alive in the last part of the game, and Markel Walker did well in the limited minutes (seven) that she played. (She sat out until mid-way through the second half, leading some in the crowd to speculate she was in “the dog house.”

The only returners who didn’t show well were Mariah Williams and Jackie Shepard – Williams, because her game seemed to be off, and Shepard, because she was only inserted into the game for a few minutes at the end.

Of all the freshmen, center Corrine Costa got the most minutes, and she did better than I expected. She is much more aggressive under the rim than 2010 graduate Moniquee Alexander, who used to drive me insane with her soft play. Costa needs to work on her shooting, but she gets up and down the court very fast for a tall girl.

Rhema Gardner got the second-most amount of time, but she only had one steal and four turnovers to show for it. Thea Lemberger played only three minutes near the end of the game, with Shepard, and had one rebound.

It’s coming along. The Bruins were trying to run passes and plays in transition that bobbled at the end, but that will come along as team chemistry continues to build. The shooting was great at 45.5 percent, and UCLA out-rebounded Vanguard 65-35.

My one concern is the lack of depth on the Bruin team. When bench players were put in towards the end, Vanguard began to score. It will be interesting to see how UCLA fares in their season opener Friday against San Diego State.

A Vanguard player crumpled to the floor crying in the second half in what looked like a shoulder dislocation. You could have heard a pin drop in Pauley Pavilion until she got up. On her way back to the bench, Dixon and Nzekwe ran by and gave her a pat. How sportswomanlike is that? I was impressed.

A UCLA cheerleader landed on the head of another cheerleader, and he passed out. He woke up eventually and was taken out on a stretcher. Thoughts to both for a complete and quick recovery.

Jasmine Dixon gets one of her 16 game rebounds in the first half.

Dixon puts up a shot.

Doreena Campbell – still being vocal this year – runs the point.

The UCLA coaching staff has a new strategy this year: while the other three have an overly-long meeting at the beginning of a timeout, the fourth coach will keep players engaged by delivering some pre-timeout talk. 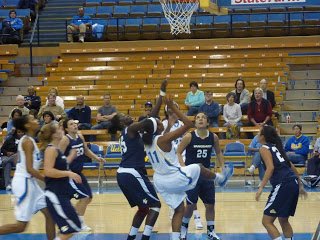 One of the cheerleaders had another squad member land on his head, and it knocked him out cold. He awoke and was taken out on a stretcher holding an icebag to his forehead.