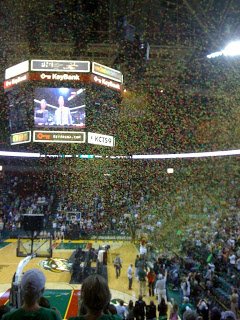 (Photo courtesy of my friend Colleen, of infamous section 113)

The rain showers didn’t stop the Seattle Storm’s celebration parade tonight, nor did it dissuade the team’s loyal fans from going to watch, and packing Key Arena for a victory celebration.

KeyArena erupted when Storm CEO Karen Bryant said, “We did not lose a game in this building!” Some fans pumped brooms in the air to further emphasize Seattle going 21-0 at home through the regular-season and the postseason, sweeping its way to the 2010 WNBA title.

The day was recognized as “Seattle Storm Day” by the city, county and state. Tears started falling from players like Finals MVP Lauren Jackson when confetti dropped as a montage reel from the championship win Thursday played on the jumbo screen.

The practice players knew it too:

“By the 20th practice, I knew they were going to win it,” said Cory Christianson, who has been part of the practice group for five years.

And this is priceless:

The celebration ended with the team traveling to the four corners of the court. Fans were allowed to take pictures with both trophies, but the highlight was coach Brian Agler doing his now famous Stanky Legg dance at center court with Camille Little, Le’coe Willingham and Ashley Robinson.

“It was amazing, especially out in the rain. It was five-deep lining the streets,” said Storm chairman Dawn Trudeau. “We really do have the best fans in the league.”

No doubt about it.

Great photo gallery here…..lucky fans got to touch the trophy.

The Seattle Mariners will offer discounts to Storm fans at their Sunday game.