I’m a little confused, because one news source says that “defense and unselfish play” have been the keys to the Sparks’ wins lately – four out of six, to be exact. I can see the unselfish play, but the defense? What games have these people been watching?

The Sparks’ offense has certainly picked up from early July and their last long home stand. But the defense looks to be the same. And once again tonight, the Sparks seemed to work their tails off for a basket much of the time, only to stand and watch the Shock then sail easily to their own basket for the return score. And while every win is a great thing, the two teams matched up pretty evenly in the box score, so should we get too excited about that, given the records of both teams? You be the judge.

Ivory Latta was extremely impressive for the Shock tonight. For LA, Delisha Milton-Jones continues to defy age with her silky moves and huge point totals. Ditto Marie Ferdinand-Harris, who always boosts up the entire team’s energy when she’s on court.

The funniest moment was in the first quarter when Jennifer Lacy was called for a reaching in foul. It was pretty blatant, and as the whistle blew and everyone else stopped moving, the ball laid in Lacy’s arms where she had rudely wrested it from Tina Thompson. The veteran gave the younger player the stare-down to end all stare-downs, and then she abruptly turned and walked away. Everyone in three rows of our section giggled like kids.

I really was curious to see what Marion Jones could do, but she took one shot that didn’t fall and was out of the game after 38 seconds. What’s up with that? Give somebody a chance.

Tonight’s Sparks victory over the Shock places the Sparks in a three-way tie in third place in the Western Conference standings.

Seeing the Sparks win two in a row has been very nice. Let’s see if they can make it three when they take on San Antonio Sunday. 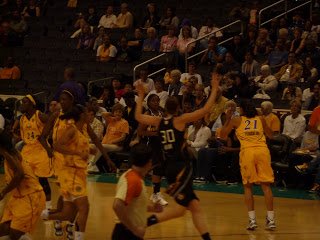 Ivory Latta looks to pass while Nicole Ohlde flashes for it. 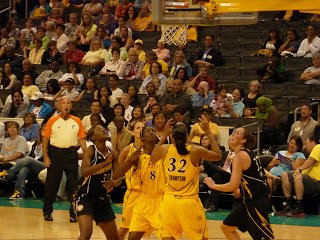 Everybody braces for the rebound in the first quarter. 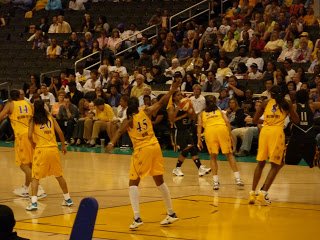 Don’t let this picture fool you into thinking that the Sparks have effective defense. Latta is about to pass it past all of them. 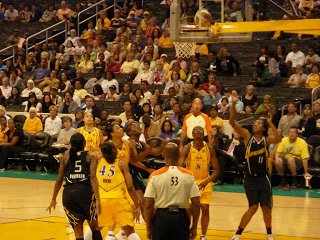 Scholanda Robinson (number 5) puts up a shot in the second quarter that doesn’t go. 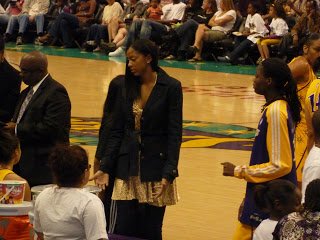 Candace Parker has been doing the matching jacket and pants thing with light eyeshadow this week. Tonight she was also getting up and walking down the line of teammates to high-five them when a particularly hot basket was made. It was cute. 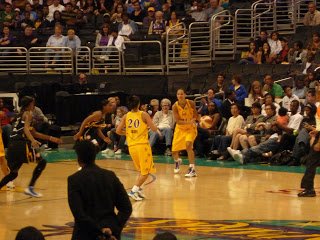 Ticha Penicheiro, passing to Kristi Toliver here, had 13 assists tonight; she’s averaging 10.2 per game. Holy crap! Mad props to her for that. 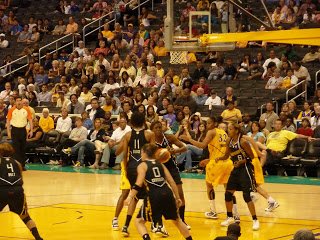 Amber Holt grabs the defensive rebound in the third quarter. 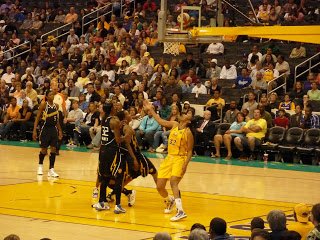 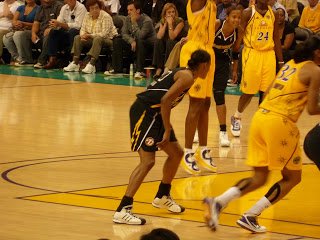 Good thing I snapped this picture of one of my ex-favorite athletes, Marion Jones, because she was pulled out of the game about 30 seconds later. She only played 38 seconds! Ridiculous.