The LA Sparks just posted on twitter at 8:30 p.m. that Candace Parker is at home resting after dislocating her shoulder in today’s game. She’ll be listed as day-to-day.

I’ve been waiting for that piece of news all day after seeing it happen. It was on the other side of the court, and CP just started walking towards the exit tunnel next to where I sit. The shoulder looked to be out of place, and she was holding her entire arm, wrist and hand completely still. It wasn’t until she got into the tunnel that any pain was evident in her face at all, actually, but then there it was. I knew what happened and I just leaned to the side and into the empty chair next to me for a minute. I don’t know how much more basketball pain I can take right now; it’s been a rough three months for me.

The Sparks rallied and did a great job without CP, who had 12 points and seven rebounds when she left the game. LA stepped up for the win. But then again, Minnesota has virtually the same record as LA; should we be excited that they had to push to get this victory?

The Lynx, like the Sparks, are a team who are better than their record indicates. Maybe Minnesota fans are frustrated like LA fans. They had five players in double figures.

I’ll be honest, though – the CP injury ruined the game for me. I was distracted and not really paying attention after that. This probably ruins her chances for MVP, and she was doing so well thus far this season. Plus, if the Sparks don’t have Candace – which is the only thing they’ve got going for them right now – they don’t have much of anything.

I hope Candace finally has her surgery this winter. 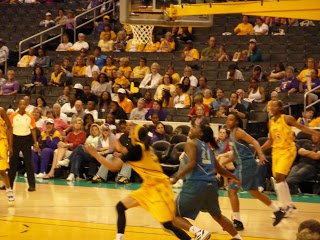 Candace Parker out runs former teammates Nicki Anosike for the ball in the first quarter. 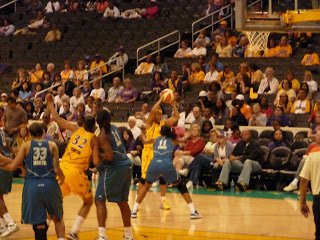 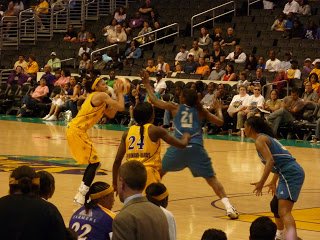 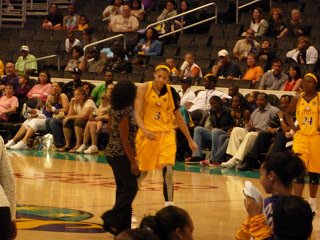 Parker walks off the court with the team trainer after sustaining an injury in the second quarter. 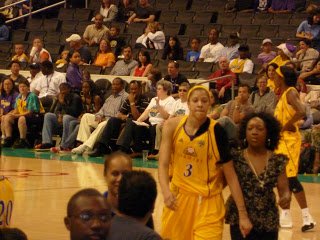 She kept her arm perfectly still and her wrist frozen the entire way across the court, and into the tunnel. The shoulder looks to be out of place. The pain came to her face finally when she entered the tunnel, and I was too stunned to take a pic. 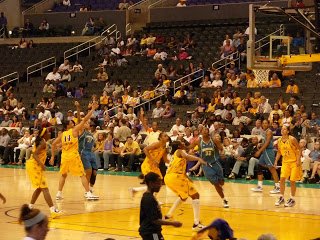 Seimone Augustus unleashes a shot in the third quarter. 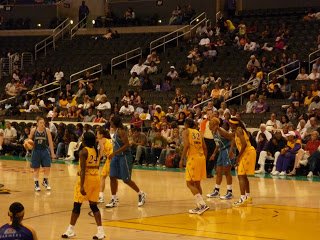 Lindsey Whalen brings the ball up the court. 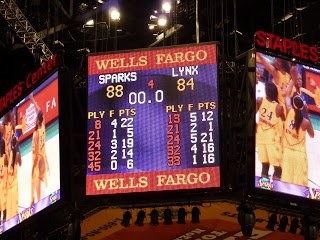 The Sparks hung on to win it.