Candace Parker played like a woman possessed from tipoff, which she won. She was stealing the ball, making assists, knocking down shots, making successful back door cuts, blocking. Ended up with 30 points and 10 rebounds, and broke the 1000-point scoring mark. She only played half of a season last year, too. Amazing.

Delisha Milton-Jones also looks scary good. She is 35 but you’d never know to watch her.

The Sparks really need to work on defense. Their D is not good at all.

The Mystics are no joke this year. It’s great to see that. Monique Currie, Crystal Langhorne, Katie Smith, Lindsey Harding and Chastity Melvin all scored in double figures. They have great communication and play like a tight unit. If they don’t go deep into the playoffs this year I’ll be surprised.

And this is the story.

The door giveaways last night were foam fingers and “opening night” T-shirts. Awesome. The emcee had fans hold up their foam fingers at a fourth quarter timeout, and it was quite a sight. 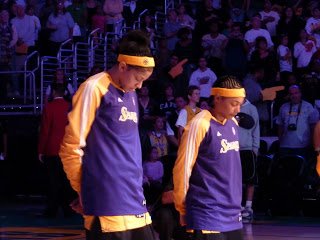 My two favorite pro players – Candace Parker and Betty Lennox – together again (during the national anthem). 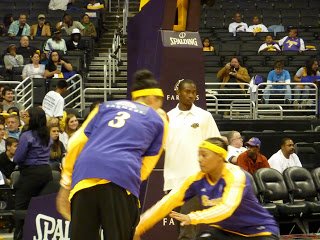 …..and then afterwards for a little offense-defense practice. 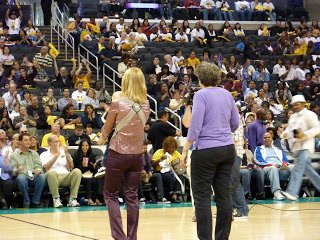 Sparks co-owners Carla Christofferson, with baby Jack on front, and Kathy Goodman, welcome the crowd to the game. 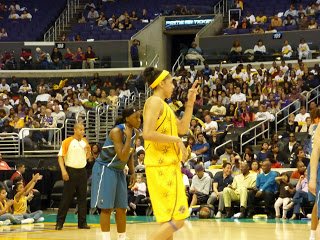 Parker telling her teammates what the play’s going to be. 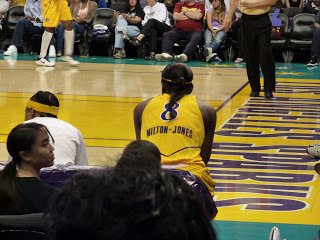 Delisha Milton-Jones was having back problems at the beginning of the third quarter, so she sat out and on a foam roller for a bit. 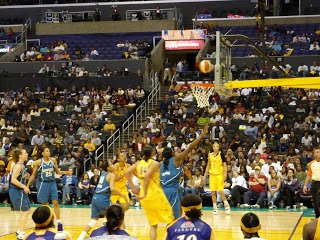 Parker, right, watches Lindsay Wisdom-Hylton do some of her damage at the beginning of the third quarter. 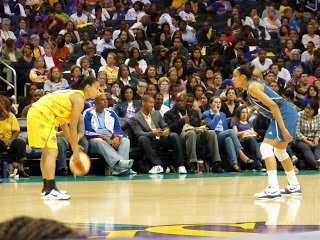 Kristi Toliver, who played for most of the second half while Ticha Penichiero sat out with a sore Achilles tendon, vs. Lindsey Harding. 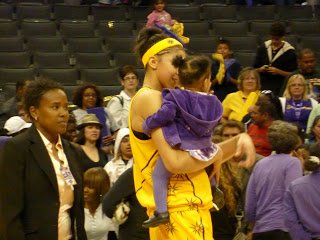 Parker sweeps up daughter Lailaa after the game…… 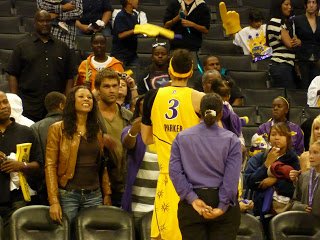 …..and goes to greet friend and UCLA Coach Nikki Caldwell (Tasha Butts was there too).

In other games last night, the undefeated Dream squeaked by the Mercury, 96-93. The Liberty beat the Silver Stars 77-71.