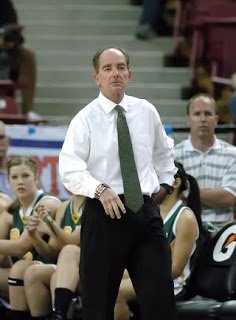 For all the fuss made over Jeff Sink, and for all the times he was star struck during the days of last weekend’s Final Four, it was one non-game moment that meant the most to him.

He and his WBCA All-American team were walking to the Alamodome for their game. Who should be on the other side of a short fence walking the other way but Stanford junior guard Jeanette Pohlen, whom Sink coached in high school. She spied him and smiled.

“Sink!” she yelled, and hopped the fence to give him a hug.

“I think that impressed my team, because everyone knew who Pohlen was,” Sink said.

His White team lost to the Red team by 20 points, but Sink didn’t seem to mind. He talked about the game with his usual self-depricating humor.

Tell that to Chiney Ogwumike, who put up 24 points for the White team, leading all scorers.

“What a nice kid,” Sink said. “She gave me a hug afterward and thanked me. She’s so smart, and so well-spoken.”

But that isn’t really news – we all know Ogwumike and her Cardinal sister Nnemkadi are a cut above. Here’s the real story: Texas high school basketball coaches get paid a BUTTLOAD of money. Sink, who is a teacher like myself in addition to his coaching duties, talked about that discovery with wonderment in his voice.

He said the coaches told him that in Texas, head coaches who are teachers don’t teach any classes during season; they get the school day to prepare for practice. Then on top of their regular teaching salary, they get a very healthy coaching stipend. If their team makes the playoffs, coaches get a bonus for every round the team wins.

“Some of these coaches are making six figures,” Sink said. “And they’d ask me how much my stipend was. I didn’t have much to say.”

Either I need to move to Texas pronto, or a bunch of Southerners were pulling the WBCA Coach of the Year’s leg.

Sink said the folks in Texas seem to think it’s Planet Basketball there, and no other teams matter – not even Brea Olinda or Mater Dei, who were both ranked in the top three in the nation all season long.

“I kept hearing ‘we don’t need to travel’ to see the top teams,” Sink said with a laugh. “I thought, OK – I’d like your team to play Brea, Mater Dei and Long Beach Poly and see what you’d say then.”

As is typical of Sink, he is fair in his observations of the differences between California and Texas high school ball. On one hand, he said California players seem more prepared academically for college, and they are much more sound fundamentally on the court. Conversely, the athleticism of Texas players blows their west coast counterparts away.

“The message to California kids is, there are a lot of kids who can run faster and jump higher than you,” Sink said.

The Final Four experience itself was something Sink won’t forget. San Antonio is the perfect backdrop for the event, with its rich history in and appreciation of basketball.

“You can just sit there and talk basketball with people all day long,” he said.

The schedule for award-winning coaches was very busy, but Sink found time to enjoy the San Antonio Riverwalk and city scenery. At the coaches awards ceremony, he said he was “overwhelmed.”

Sink enjoyed the Final Four semifinals, which he called “some of the best college basketball I’ve seen.” It was almost as exciting as Pohlen’s buzzer-beating basket the week before, which sent Stanford to the Final Four.

“I was jumping up and down and screaming,” he said of that night, when the Cardinal beat Xavier.

This was Sink’s first Final Four, but he may be hooked now.

“It’s in Indianapolis next year,” he said. “I’ve wanted to go there.”