Both teams seems to have nerves last night, as almost two minutes went by before Mater Dei’s Jessica Duarte hit the night’s first field goal – a three-pointer at the 6:11 mark. Then for exactly a minute, it was a Monarch blitz, putting them up 9-0 at 5:11. Brea Coach Jeff Sink called a timeout, which he explained to the media later that he used for a pep talk. When his Ladycats came back to the floor, they started chipping away at their opponent’s lead.

A Breana Buczek three-shot tied the game at 11 with about two minutes to play. A Jeanier Olukemi free throw and a Kietra Wallace bucket put Brea up 14-11 at the end of the first quarter. They never trailed in the game again after that.

The second quarter saw Brea lead by five points throughout. In the third, Mater Dei’s Kaleena Mosqueda-Lewis and Ladycat Kelsey Harris traded silky three’s. But Wallace and Olukemi floored the gas and the lead climbed to 10 at the end of the period.

The Monarchs made a run to start the final quarter, and came within two at 40-42. Brea’s Alexis Perry made a shot, Mosqueda-Lewis was blocked, Olukemi got a crucial put-back, Mater Dei’s Thomas made a three, and it was 46-43 at 2:41. After Olukemi made a free throw at about the two-minute mark, the score didn’t move again.

Much of that was due to Brea’s ability to shut down Adams. The sophomore point guard was called for a charge, and then Harris stole the ball from her. Adams looked absolutely flustered at one point, caught in a trap at the top left of the key.

Afterwards, Mater Dei Coach Kevin Kiernan credited Brea’s poise for their comeback and strong win. Sink said he appreciated that the Monarchs were consistently ranked above them, and said “they’re better than us.”

I agree with Kiernan. Brea’s mental toughness in the first quarter, especially, was something to behold. It would have been easy to let the game run away from them at that point, down 9-0. But they just blinked and got it done. No sour faces, no hanging heads – from anyone, all game long.

It’s something people have come to expect from Mater Dei, whose size makes them look more like a DII college team than a high school squad. But that kind of professionalism coming from a relatively thin bunch of girls who’s appearance is not unlike many high school teams, is something you don’t see everyday. They are also ridiculous on fundamentals; best I’ve seen in a long while.

Both teams get mad props for weathering the pressure and putting on a great show that befit the occasion – a benefit for a beloved coach who died last year.

But one question lingers: is Brea Mater Dei’s kryptonite? 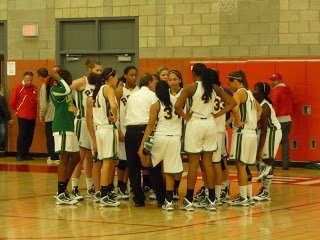 Brea coach Jeff Sink has a last but emphatic word with his team before tipoff. 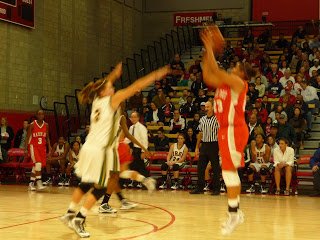 Second quarter: Kelsey Harris makes a lunge for Kaleena Mosqueda-Lewis as she releases. 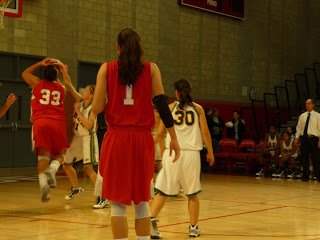 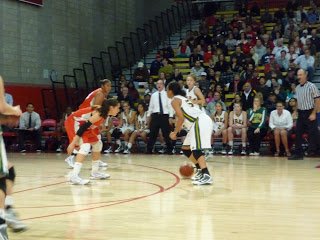 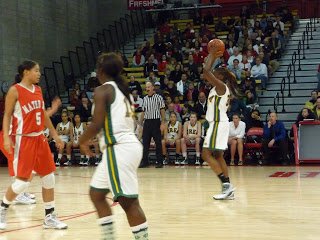 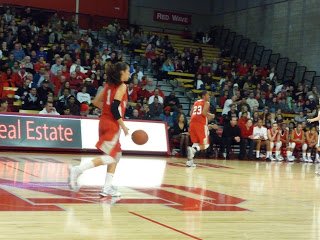 This is how it looks when Mater Dei brings the ball up court: Adams, with Mosqueda-Lewis in the lead.

Here’s another write-up on the game.