The weekend before last, I walked into the Umpqua Community College gym in Roseburg, OR to check out the Crossover Tournament. The assistant coach for one of the teams – Blue Mountain Community College – looked very familiar. I got a program and was then able to put the name with the face: Daviyonne Weathersby, who graduated from Cal State Fullerton last spring.

I went to Fullerton last December to check out their game against Vanderbilt, and had been struck by and impressed with Weathersby’s energetic play. So what was a young ex-Division I player doing helping coach a team in remote Pendleton, OR? I asked her the next day.

Weathersby said she really wanted to get into coaching, and as graduation approached, she had sent out resumes to schools across the country.

“No one would give me a chance, because they said I didn’t have any experience,” Weathersby said. She nodded toward head Coach Christy Martin.

Weathersby said she coaches the guards. The team is pretty promising, too, and they took third place in the tournament.

I really respect Weathersby for her courage. Many say they want to coach, but far fewer are willing to make personal sacrifices to make their dreams come true. Going from the LA area to an extremely small town in Eastern Oregon had to be a huge adjustment, but Weathersby seems upbeat and happy. She’s an example for us all. 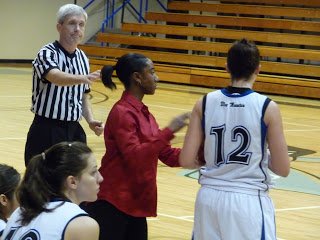 Daviyonne Weathersby says a quick word to one of the Blue Mountain guards before an inbound play. 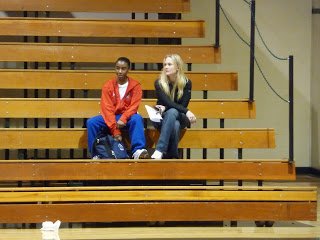 Weathersby and the woman who hired her, Coach Christy Martin.