They came, and they kept coming. Five minutes before Mater Dei and Long Beach Poly tipped off today, the folks at the Hangar Athletic Xchange in Hawthorne, CA, graciously dragged out another rack of bleachers to accommodate the swelling crowd.

In the end, it was standing room only, and the teams everyone came to see didn’t let the crowd down.

It was an intense matchup that featured a number of ranked players: Kaleena Mosqueda-Lewis of Mater Dei and Ariyah Crook-Williams of Poly – numbers 2 and 20, respectively; and Jordan Adams of Mater Dei, ranked first in the class of 2012.

Poly got off to a slow start, and Mater Dei capitalized on it and built a lead that got up to as much as 13 points midway through the first half. The Monarchs have ridiculously good execution, and seemingly can hit any shot at will from anywhere on the floor. Coach Kevin Kiernan looked like he was absolutely chillin’ on the bench at points in the first half. And when Mater Dei did start to miss shots in the second, their fans would literally scream in shock.

The Jackrabbits clawed back as Crook-Williams caught fire, and the last quarter of the game turned into a shootout between her and Mosqueda-Lewis. With more than a minute to go, the Monarchs lead 48-45 when Crook-Williams unleashed an NBA-range three that caused the crowd to erupt. But with (I think) 18 seconds to go, Mosqueda-Lewis answered with three of her own, and a foul shot at the end sealed the win for them.

It was everything you could want in a game, and at the end I jumped up and down a couple times, making my kids laugh. But that’s what great basketball does to me. 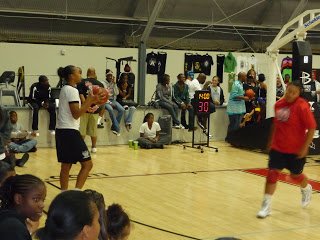 Mater Dei junior forward Alexyz Vaioletama is still out with stress fractures in her legs, so had to settle for passing the ball to teammates in warmups (Kaleena Mosqueda-Lewis running by to the right). 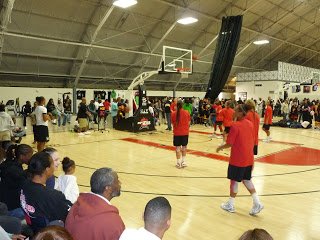 Vaioletama is about ready to suit up again, and is itching to play. 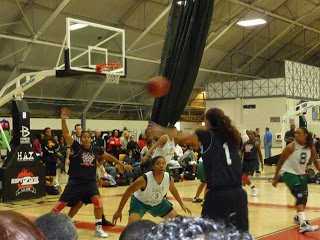 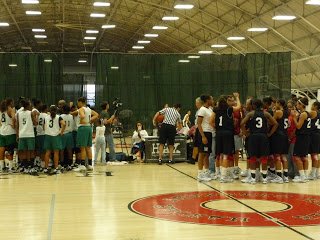 Both teams huddle during a timeout in the first half. 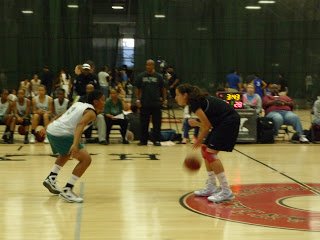 Here’s a matchup I loved with a passion: Adams vs. Crook-Williams. Adams brings the ball up court halfway hunched over, like a panther ready to strike. But this was a one-sided love affair for me, as Adams doesn’t guard the PG on defense – that is left to another teammate. On defense, Adams plays the 2. Interesting, huh? 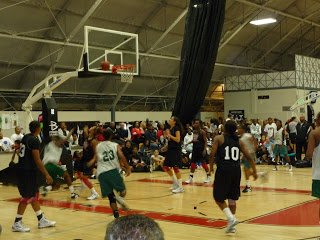 Second half action: Poly’s shots weren’t falling as much for a little while in the first half…… 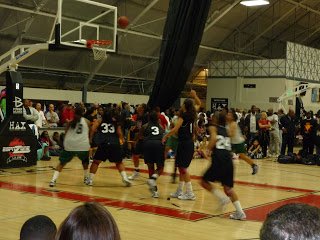 …..but by the second half they’d caught up. They just kept shooting through the problem until it was solved. 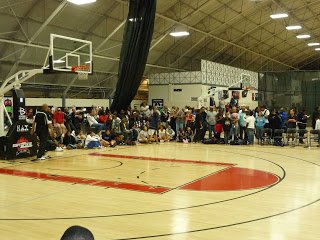 People stood in the corners – three deep – clogging them up. Lotsa video taping going on, too – looked a lil like the NCAAs, in fact. 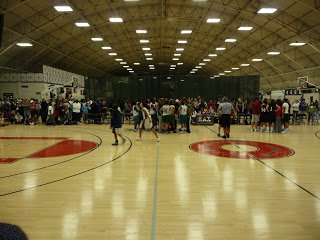 Eventually people also stood behind the two team benches to watch the game.

Here are the complete results from day one of the weekend’s showcase:

Chatsworth was supposed to play but didn’t show up. What’s up with that?