I get emails from both the Seattle Storm and LA Sparks. Today this came from the Storm: 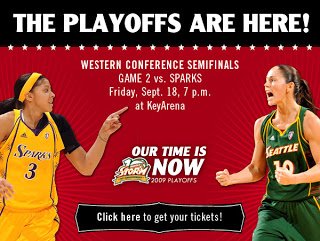 I love this because it’s a break from the norm. Usually publicists on both ends play up the rivalry between Lauren Jackson and Lisa Leslie. But probably since Jackson is injured and Leslie is about to retire, they chose Sue Bird and Candace Parker for this picture. But it isn’t quite the same.

Both Bird and Parker are two of the nicest players in the WNBA. To have them pointing and screaming at each other is extremely laughable, to say the least. My guess is the pictures came from 1. right after Bird hit a tough shot at a crucial moment in a game and 2. as Parker is helping direct traffic on the court.

In any case, game time is 7 p.m. Wednesday at Staples Center, and then both squads head to Seatown for Friday’s game 2.