LOS ANGELES(AP) Noelle Quinn led the team she followed as a child to a dramatic victory in front of loved ones.

Tres. As per twitter.com, I really wonder who is twitterer for the Sparks:

LA_Sparks wow… do people really need to hate on the confetti? haters everywhere! confetti is a nice touch…GO SPARKS!!!!

Quatro. Candace Parker is looking more like her usual self. She’s coming back! The quickness is back in her step and her shots are falling again. Eighteen points is the most she’s had this season so far, and they went well with 13 rebounds. 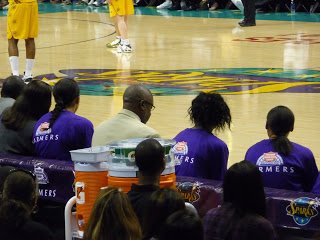 Who’s the new assistant coach? Why is Marie Ferdinand-Harris sitting on the bench the last 4-5 games? 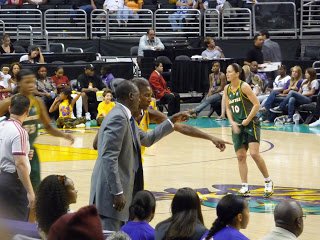 Here was the first thing I was surprised to see: Michael Cooper calling Lisa Leslie over during a Storm free throw, and then the two of them pointing and discussing. I haven’t seen that before. 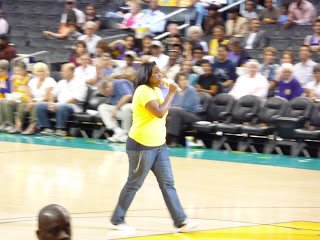 The new MC is the best. Note to Sparks: keep her, please. She has just the right level of enthusiasm and is able to pump up the crowd. She doesn’t have a helium voice like roller girl, who is thankfully gone this year, pigtails-on-a-grown-woman and all. 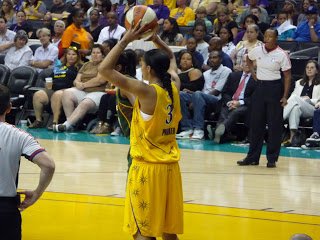 During the noon game Tuesday, the educator I was sitting next to said, “this is Candace’s team now.” She’s correct. Feel that? It’s the balance of power shifting….. 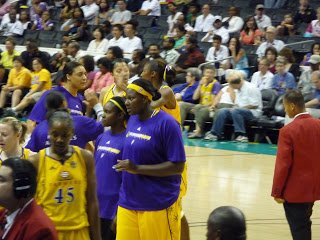 Second (and third) things I was surprised to see: Parker screwing up her face in the affronted mother look twice while talking to Leslie. The first time was on the jumbotron, and it looked like Parker was admonishing LL. The second time was above, but unfortunately LL’s hand is in the way of Parker’s face – she began gesturing the longer Parker went on. It was kinda weird because LL made a point to mention how she was mentoring Parker last year, but it seemed tonight like the opposite was happening. 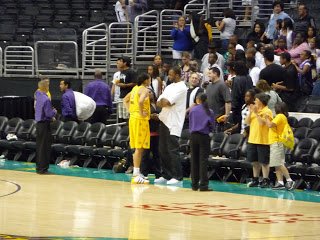 Amusing: Everyone else has wandered into the locker room except Parker, who has gone courtside to talk to….her own husband. And they stood there for a few minutes. I guess it couldn’t wait until they got in the car. 🙂

Cinco. “Debo,” aka Tommy Lister, may be a regular now. I ran into him outside before the game, chillin with his daughter and wife. He remembered me from Pickupstix the other day. What a nice man – he gave me his number and offered to come speak at my school. Wow!

The Sparks put him on the jumbotron, too, in a taped spot urging fans to get loud. It was pretty freakin funny.

Seis. Seattle’s got overtimes. These teams match up well, so it’s always a good game every time. The Storm did well tonight.