Last night the Sparks looked more like they did in their opening game: they were hustling, playing good transition game and working together like a unit. I like the team that comes to Staples better than the one I have to watch online.

Shannon Bobbitt played with a lot of confidence, and put seven points and had five assists.

There was a short piece in the Sparks game program about how Betty Lennox and Marie Ferdinand-Harris have both been starters for roughly 75 percent of their pro careers. And now that MFH is now off the bench behind Lennox, she is “accepting her role with grace and professionalism.” MFH is also fiesty, and matched Lennox’ 10 points and two assists. Lennox won the battle of the boards, however, garnering eight to MFH’s one. 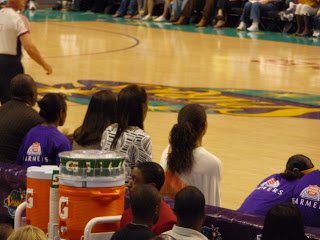 This is not a sight you want to see if you’re a Sparks fan. 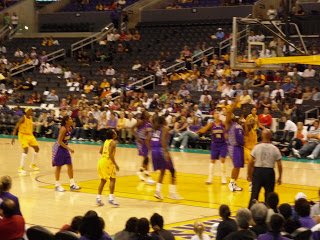 Shannon Bobbitt puts up one of her ace shots. 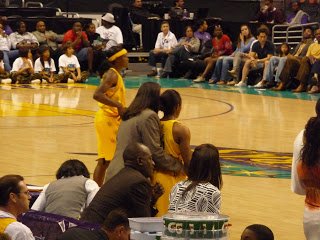 Assistant Coach Marianne Stanley talked emphatically in Bobbitt’s ear for a good 20 seconds. Then she said one more thing, strongly, swatted her on the ass and sent her back out on the floor. 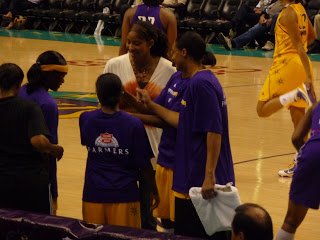 CP has them laughing at the timeout. 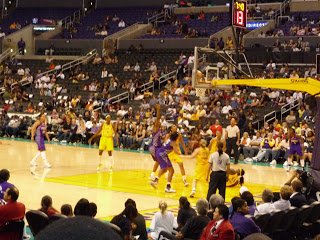 Second half action. Sacramento is the second team to make us play offense at the opposite end of the court in the last half. I don’t like teams that do that. 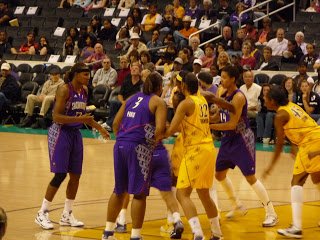 Courtney Paris finally got to play in the second half. She did fine.

Non-game-related note: Me and those in my section are relieved that the grown woman who wore her hair in two pigtails on the sides of her head, and roller-skated around the arena, is no longer there. She has been replaced with an easy-going white guy who doesn’t have her annoying, high-pitched voice. He’s nice and easy on the ears.

Footnote: CP twittered earlier this evening that she met with Penny Toler today to discuss her time table for returning, and “July is looking good.”