For the first time in Pac-10 Tournament history, today’s semi-finals will feature all California teams. USC and California will square off at 6 p.m., and Stanford and UCLA take each other on at 8:30 p.m.

I was at work yesterday morning but was following online (and with the help of friend Daniel in the last minute) when USC hung on to upset #16 Arizona State, 70-65. Trojan point guard Camille LeNoir lead the charge with 18 points, and Heather Oliver added 17 – including five three-point shots. Danielle Orsillo lead the Sun Devils with 17 points.

I was on hand for the Arizona-Stanford game at 5 p.m., and Arizona is not as the 77-46 final score would indicate. It’s not that Arizona is that bad – it’s that Stanford is that good. The Cardinal is so loaded that one of their reserves – Lindy La Rocque – went off for four three-point shots. Three other reserves played key minutes as well.

The thing I really appreciated about Arizona was how scrappy they played, and how they kept fighting all the way until the final buzzer. There was never a moment where their heads hung and one got the sense they’d given up. I addressed that in the post-game press conference by asking Ify Ibekwe and Courtney Clements what improvements they’d noted from beginning to end of the season.

Ibekwe said they’d grown and matured, that they think more, and now they fight back and they didn’t used to. Clements said the team had needed to find players who would step up to be leaders, and now they have several.

I liked hearing both of those things. The Wildcat program was never the same since the death of Shawntinice Polk in September, 2005.

Another thing I really like is Coach Niya Butts. She has a serious demeanor, but at the same time is very warm. When she had a short coughing spell during the press conference (she said she’s been a little ill), Ibekwe rubbed her on the back. It’s obvious the players like their coach, and I can see why from talking to her a few times. She’s the perfect answer in the Arizona program. 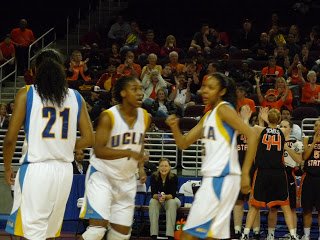 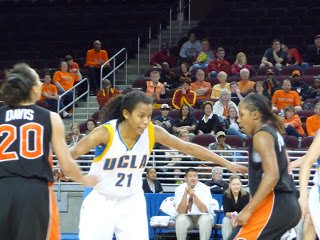 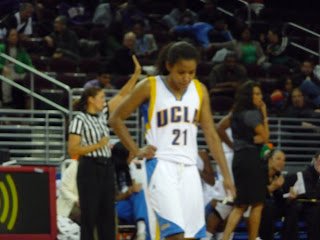 Doreena Campbell walks down court while a free throw shot is being set up. 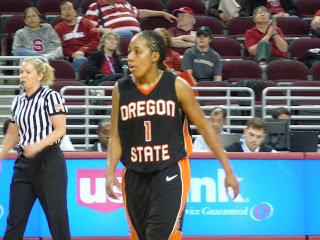 The biggest flopper in the Pac-10, point guard Mercedes Fox-Griffin.

The UCLA-OSU game was exciting, as expected. UCLA finally got the monkey off their back (lost to them a few weeks ago) by putting them away, 62-56. Mad props to Brittney Davis, who scored 22 points for the Beavers – 15 in the first half. She was playing big.

I was amazed at UCLA freshman Antonye Nyingifa, who put up a team-high 18 points. She has been a monster the last few weeks, and I asked her and Doreena Campbell at the post-game press conference what has been going on.

“As a team, we have come together and begun to work together as a team,” Campbell said.

Nyingifa said she’d had a slow start as a freshman, but that she was constantly trying to “build in daily improvement, like coach says.”

I have really become a Campbell fan this year, and it’s not just because of her fearless play and work ethic on the court: it’s because she’s also a bit of a nerd. It seemed like it on her player interview that they’d run at timeouts at Pauley Pavilion. Then I learned from a reliable source that Campbell has been known to hit the library after games, and I was in platonic player love. How could I not adore a young woman who can break ankles both on the court and in the classroom? (She also yells when she’s running the point, as she was last night).

OSU is much, much improved, and Coach LaVonda Wagner said this year’s 19-11 record is the best the program has had in a long time. The only fault I’d find with the Beavers is point guard Mercedes Fox-Griffin, who likes to flop. She was flopping all over the place at Pauley back in January, and tried it a couple times last night. The first time was the most blatant, and the refs weren’t buying it at all (nor did they the second time). Still, it’s irritating. It reminds me of the Sparks circa 2002, when they played dirty, dirty ball.

The winners of tonight’s semi-finals will go on to play in the championship game Sunday at 6 p.m.