Home Uncategorized Vicki Baugh out for the season 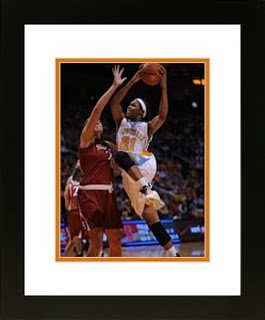 It is as feared: Baugh tore the anterior cruciate ligament in her left knee in last night’s game against Oklahoma.

University of Tennessee Associate Athletics Director Jenny Moshak announced this evening that sophomore forward Vicki Baugh has torn the anterior cruciate ligament (ACL) in her left knee. The injury occurred during the second half of Monday’s loss at No. 2/2-ranked Oklahoma.

“Dr. Greg Mathien, UT team orthopedist, confirmed that the MRI performed on Vicki revealed a torn ACL in her left knee,” said Moshak. “She will begin rehab immediately, but is out for the season.”

Baugh, a 6-4 sophomore, from Sacramento, Calif., had seen very limited action since suffering a sprain of the knee in practice on Jan. 1.

I’m so tired of torn ACLs. This one is even more heartbreaking because Baugh had worked so hard to rehabilitate from the same injury last year. That, and the fact that she has so much heart. She really puts it all on the court, and that was evident last night when she put a towel over her head when being wheeled out of the arena. I’m sure she already knew what had happened.

Scout.com correspondent Maria M. Cornelius had this to report on a thread on “The Summitt” message board tonight:

Also, team did not practice. Had a meeting and watched film as a team and some one on one. Showed Briana clips of Shannon on defense.

Pat said team gives in to fatigue, rather than fight through it, indication of youth not having been challenged to this extent before as players are not accustomed to being pushed like this on this level by opponents.

Turnovers: It appears to be particularly glaring on the perimeter with decision-making and across the board for perimeter players. Overpassing and passing in a rush. Need to make a dribble or two and make sure the ball gets to where it’s intended. Also smarter passes into the post.

Tough week on tap for team.

I wonder where the Lady Vols will end up at the end of the season this year. Life lessons never stop.

In the meantime, a Summitt board member has started a facebook group called “keep your head up, Vicki Baugh, we love you.” Damned nice of her.

Or if you’re so inclined, as I am, to send a card, here is the address:

Hang in there, girl, and much love.

Somewhere between international and college play

The World Cup quarterfinals are set