Fans wore purple. The University of Washington Marching Band and cheer-and-dance team performed at halftime as mascot “Harry the Husky” roamed the floor. And the loudest round of applause in pre-game introductions went to San Antonio Stars rookie Kelsey Plum.

This was the homecoming for the Washington star-turned No. 1 overall draft pick. Fans also celebrated first-year Storm guard Sami Whitcomb on “UW Night.”

But while the crowd was welcoming, the Seattle Storm was not. The 5-foot-8 guard finished with just eight points on 2-of-11 shooting, as her Stars fell to 0-11 with a 75-57 loss to Seattle.

By margin, it was San Antonio’s largest defeat of the year, as the team shot a season-low 29 percent from the field and made a season-low 19 field goals on the night.

“I thought that Seattle outplayed us,” said San Antonio head coach Vickie Johnson. “We had no desire to compete tonight. We’re not built like that. I put this team together because I thought we had heart. No matter our record, we still always fought. Tonight we didn’t fight and I’m very upset about that.”

Breanna Stewart led all scorers with 22 points and 15 rebounds – her third double-double of the year- as Seattle got back over .500 at 6-5. Kayla McBride paced the Stars with 11 points and nine boards.

“If we come out like that and just continue to push them and press the aggressiveness, be the aggressors, it’s hard for the other team to try and score,” Stewart said.

Cold shooting plagued both teams in the first half, with San Antonio shooting just 29 percent from the field after 20 minutes. Seattle fared little better at 38 percent, but went 9-of-11 from the free-throw line to take a 11-point lead into the break.

A quick 5-0 San Antonio run to start the third cut that lead to six and forced the Storm to call timeout, but Stewart responded with an 8-2 run of her own to give Seattle its largest lead of the game at that point at 12.

“I didn’t think we came out of halftime very sharp at all, and they just came back from 20 down on L.A. and cut it to five, so we had to make sure that we tightened things up very quickly,” Storm head coach Jenny Boucek said. “Stewie happened to get hot, that helped us, but I also thought we tightened things up defensively at that time also.”

The Storm took a 55-41 advantage into the fourth, and led by as many as 20 in the final period. While Seattle bounced back to shoot 45 percent over the final two quarters, San Antonio could not jump start its offense, going just 9-of-31 from the field in the second half.

Boucek had praise for her team’s defensive effort.

“I thought we started to look more how we’re supposed to look,” she said. “I have to go back and watch the film to evaluate exactly how well we did or did not play, but I did think we got more to how we want to play on both ends of the floor.”

Seattle is back at KeyArena on Friday night to finish a three-game homestand against the Phoenix Mercury, while San Antonio will try again for its first win of the season on Wednesday at Dallas.

“It’s been great,” Plum said of the fan support on Sunday. “It’s frustrating because I’m competitive and we want to win. I want to play well and I didn’t. I’m trying to take some good out of this trip and it’s amazing to be back. The fan support — 9,600 people — I feel very loved and am appreciative of that.” 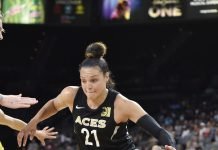 Kayla McBride works her way into the spotlight for the Aces 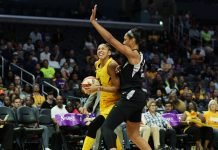 Ahead of the big showdown

More teams stepping on to the court

Anosike to have surgery, will miss six weeks; Parker and Catchings...