Selections for the NCAA Tournament were announced Sunday in what felt like both a comeback and a reboot for the big stage.

Equity between the women’s and men’s tournaments was apparent in both branding, and the size of the fields. And selection show team parties, as well as the tournament itself, looked to have a more similar feel than they have since before the COVID-19 pandemic.

“It’s really exciting,” said Nina King, chair of the NCAA Division I Women’s Basketball Committee. “Being back to normal and then with all of the new firsts, right? (The) first time we’re having 68 teams. We’re really excited. I think (there’s) just kind of a great buzz and energy around this year’s bracket to be doing it in a more normal way.”

The field was expanded from 64 to 68 teams for the first time, with the last four teams set to play for a spot beginning Wednesday. It was a move that signaled equity between the women’s and men’s tournaments that began in earnest last year, when players called out the NCAA for unequal treatment.

Using social media, athletes posted photos during last year’s NCAA Tournament, which was in one location due to COVID protocols, to highlight the lesser accommodations, “goody bags,” testing and other inequalities between women’s and men’s teams. Outcries about using the “March Madness” logo only for the men’s tournament prompted the NCAA to make changes.

King said the women’s and men’s tournaments are on equal playing fields this year, beginning with the size of the field.

“As we unveiled the bracket, we are using the March Madness logo,” she said. “You’ll see a lot of enhanced signage in and around venues, both first and second rounds, regionals, and then of course at the Final Four.”

“(It) was our critical priority to ensure that the student athlete experience was equitable. Things like momentos and gifts with be the exact same…..there’s been great care taken to make sure that….we are creating an equitable experience.”

The pandemic shut down the 2020 NCAA Tournament, and forced last year’s event into a “bubble.” This year saw the return of remote cameras at team selection parties throughout the country, and athletes reacting when their teams were named to the field, for the first time since 2019. Competition will proceed at regional sites prior to the Final Four in Minneapolis.

The joyous celebrations capped an exciting season of play across the country that saw a lot of ups and downs, and very few clear favorites in any region. Many teams returned to the Tournament for the first time in years, and they reveled in being back. 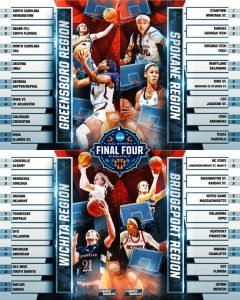 In her first year as head coach at Notre Dame last season, Niele Ivey’s team struggled, and didn’t make the tourney for the first time since 1995. This year they were 22-8 and a force to be reckoned with in the ACC. Ivey said last season was a motivator for her.

“This is a dream – I’m just so excited,” she said after the Irish were selected and seeded fifth in the Bridgeport regional. “The feeling I had last year didn’t sit well. My whole goal, everything I’d been working for was to get us back. This is history. A lot of my players haven’t been to the Tournament.”

“This is a great opportunity for this program, and for myself. We’re going to be really well-prepared. My team is really hungry. Not going last year made me grow as a person and a coach, and it was crazy motivation for this group.”

Notre Dame will face No. 12 UMass on Saturday.

The Wichita regional sees the return of Ole Miss to the Dance for the first time in 15 years. A 7-seed, they will face No. 10 South Dakota on Friday. Rebel coach Yolett McPhee-McCuin said she and Yotes coach Dawn Plitzuweit are familiar with one another from their days coaching against each other in the Atlantic Sun Conference.

“We know each other well, and this will be a doozy,” McPhee-McCuin said.

But she said she and her athletes are excited.

“We’re going to go to this tournament and act like we belong,” McPhee-McCuin said. “We’ve been waiting on this moment. We didn’t just slide in. We’re grateful to have this opportunity, and we plan on representing Ole Miss the right way. I’m telling you – my players are going to be ready to go.”

Returning to the Tournament for the first time in nine years is Colorado, seeded 7th in the Greensboro regional, where they’ll take on No. 10 Creighton Friday. The Buffs began the season 16-0, and then went into a slump after their first loss. They rebounded to make the semifinals of the Pac-12 Conference Tournament.

“All week we felt like we did what we needed to do to have our name called,” coach JR Payne said. “There is really nothing that compares to seeing your name actually pop up.”

She said the team wasn’t concerned about seeding, but was pleased about it nonetheless.

“I think (the seeding) speaks to the way we’re playing right now, winning eight of 10 games, and the only two losses coming against the No. 2 team in the country,” Payne said. “We’re playing really good basketball, and it’s great for our team to be recognized in that way.”

Louisiana State returned to the tourney after a long absence as a fiery, revitalized No. 3 seed in the Spokane regional, under first-year coach Kim Mulkey. The longtime Baylor coach turned a 9-13 program into one with a 25-5 record this season, which also saw the Tigers at second place in the SEC. She said she is looking forward to facing off with No. 14 Jackson State on Saturday.

“I’m excited for LSU,” Mulkey said. “Amongst a lot of negativity right now, what a wonderful positive feel today. We sat there on the PMAC (Pete Mavarich) court when I was hired in April, and did you think we’d be sitting here now talking about this? Of course y’all didn’t. But I’m so happy for the players.”

King said the NCAA will continue to strive for gender equity.

“I think it’s really important to note that the work is not done,” she said. “We will continue to make sure that we enhance the women’s championship, and make sure it is the very best women’s sporting event in our country.”