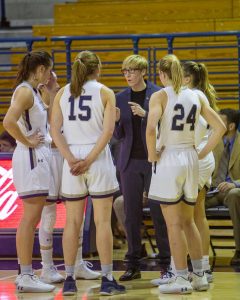 Entering her seventh year as head coach at Yale, Allison Guth has twice led the Bulldogs to a school record 19-plus wins, as well as postseason appearances, for the first time. Individual players have also won all-Ivy League awards and academic recognition during her tenure.

Guth was a high school state champion in the Chicago area. She earned a spot on the University of Illinois team as a walk on, and helped lead the team to the NCAA Tournament in 2003. She began her coaching career as an assistant at Loyola-Chicago, and then served in the same capacity at Missouri, DePaul, Yale and Northwestern before being named the Bulldogs coach in 2015.

You were an assistant at Yale before you became head coach there. How did you get back to the Bulldogs?

You had coached under a few different systems, and under several great coaches. How did you take what you learned from them in formulating your own approach?

I’ve been fortunate to learn from some of the greatest minds and greatest humans in our business, on each stop of my coaching career. I’m really grateful to Shannon Reidy, one of the best high school coaches in the Chicago area, before she got her gig at Loyola Chicago. From her I got the opportunity to see what the transition from high school to college was like for her, and in building a program from the ground up. Then I had the chance to go to Missouri and work under Cindy Stein, who was just a phenomenal manager of tasks, and I took a ton away from that.

Then getting the opportunity to go back for Doug, a childhood hero of mine, and if you grew up playing basketball in Chicago he is just, the guy. I probably take a lot of my coaching philosophy from coach Bruno, but when I think about him I think of a great father a great man and a great coach who leads with his heart. I love the way he taught the transition and the push, and the ability to give your players the confidence, to give them the green light and play up-tempo. He has poured his whole life into growing the game. So I take a lot of my offensive philosophies from coach Bruno.

Then I worked for Chris, who is the only coach I’ve ever worked for who went to four Sweet 16’s with the strategy of fronting the post, face guarding the post. I learned so much about the tenacity of defense from Chris’ perspective. You see someone coaching her own daughter and managing that life of being a coach, a wife and a mom. Then I got to learn from a legend like Joe McKeown and about his version of a matchup zone. He allowed me to dive in and learn from him. He also got to coach his daughter and had a great balance of coaching well and loving on your people. At that time I had just got married and my wife was diagnosed with cancer at age 27, and he was so incredibly supportive.

I’m remembering these people for being great humans and giving me opportunities, but also keeping basketball in perspective. So my own coaching philosophy is a combination of all those great humans I got to take from, and then it’s important to be authentic and true to yourself. My personality is massively different than every coach I’ve coached under, and that authenticity comes through to players. Good relationships are built on love and trust.

How do you build a great program?

I think you’ve got to build it being relationally-driven. Culture is something that isn’t static but dynamic, and it chances based on the personalities in that locker room and who you surround yourself as a coaching staff. Our championship culture is based on being process-driven instead of results-driven, and we really focus on living our standards. We’re committed to a growth mindset. Any organization that has a common sense mission of self, with coaches helping players achieve what they want to achieve tends to click in a beautiful way when you have healthy relationships built love and trust. It happens in creating that kind of culture where people are motivated and inspired by trusting that coaches are helping them to grow. When they individually are their best, we are all collectively our best.

What is the Yale Bulldogs culture like? If I walked into a practice, what would I see happening?

As far as what defines a Bulldog, when you step in, we are process-oriented, we are united as a team, we are competitive, driven, and we have a lot of fun. Those five things define our character and define Bulldog basketball. We are committed to our five standards to where we don’t have a team rule playbook – we’re committed to how we operate as a unit. We have five standards: we protect our brand, we practice direct communication, we’re committed to a growth mindset, we believe that winning truly matters….we’ve changed the culture and the expectation of this program that postseason play is a must. That concept has changed throughout the years with our culture because of the talented young women and commitment they have to putting this program on the map.

When you come into a practice, hopefully what’s coming to light is what you just heard. Creating a culture of competition, practicing and having fun. The attention to detail when you came into a practice is what I’d want you to be experiencing.

Coaching at an Ivy League school is different from the average student-athlete experience. How do you help your athletes balance academics and basketball?

I’ve coached in the Big 10, the Big East and the Big 12 and I believe that the way we celebrate and walk the walk of balancing our student’s lives is done in every intention – how we schedule our contests, our practices only when they’re not in class. It’s how we schedule our back-to-backs so they don’t miss class during the week. Normal NCAA regulations give athletes one rest day a week, and we have another 48 rest days per year that we must give out. Having no summer access is huge. We’re allowing our players to work out with programs that aren’t ours when they do internships across the country. This is only place I’ve ever coached where had entire graduating classes plan on becoming doctors. You can only do that if you have a commitment. We also have a really intense, competitive student-athlete who wants to make the most of their time in the gym. 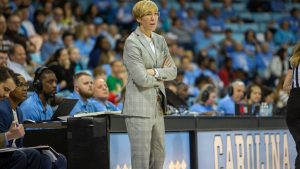 In what ways have you changed as a coach from when you first began?

I’m entering my seventh season at Yale and have changed immensely. I was very eager in my first year and had limited patience. I wanted badly for us to achieve our goals quickly, and I didn’t truly understand the work it takes to build and build and build the culture that is required to win consistently. I’ve changed my mindset and I think I’m a better teacher. I continue to be a great strategic X’s and O’s coach, and I continue to switch up our strategies to navigate to the strengths of the players. I also began to allow players to see their own growth while they’re here. If they find a way to compare themselves from year to year with basketball metrics, they can see their own improvement from year to year.

We don’t have one player that has transferred under our program. The ability to keep your players focused on how they’re individually improving, how they’re becoming the best teammate, how they’re valued – I’ve grown in ways to be able to communicate and celebrate that.

How did you deal with the shutting down of the Ivy League season last year, and being on lockdown throughout the pandemic?

That is something I think we really really had to navigate with some perspective on the priorities in life. We were grateful for the help of our players and their families in putting life in perspective very quickly. As a department and a university we were proud of trusting our leadership, because there was no doubt our hearts were broken for our players and the team, because they had worked so hard. When the Ivy Tournament and then the NCAA Tournament was canceled, we looked to control the controllables. We focused on how to pivot and how to be adaptable. We looked at how to improve between the ears, and since this thing we love was taken from us, how can we continue to grow and get better for when we come back. WE focused on social justice issues, mental toughness, we ready books together, we got on Zoom together. That helped our players, in a time that was unsteady, how to correlate their behaviors and coordinate them with how they wanted their results to be. We were focused on that alignment.

You walked on to the Illinois team, helped them get to the NCAA Tournament and were then offered a scholarship. That’s brave. What were your thoughts going into that year, and how did you come to have such strong belief in yourself?

I think I was incredibly fortunate to have made some connections with current players on the team that I was playing pickup with. I remember after that, the confidence they instilled in me, they told me, “you should look at trying to join the team.” Then you talk about the stars aligning at that time where they needed a guard, and then getting to learn from a Hall of Famer like Teresa Grentz. I truly felt like there was someone looking out for me from above that put me in a place where the timing was right. My tryout was 10 days of practice and playing in Russia, Lithuania and Latvia. I guess I did alright because coach Grentz had me come up to the front of the plane and told me there was a jersey waiting for me when we got back. It was the greatest day of my life, and I was so grateful that they gave me the opportunity.

I take a lot of what I experienced as a college player into what I do as a coach. I have a unique perspective being a walk on and trying to impact the team in a leadership way. It probably ignited my love for coaching. Earning a scholarship…..my family and I were forever grateful.

You must be thrilled to be back this year.

We’re absolutely thrilled to be back. We’re a work in progress because we only returned one starter, and we’re so youthful that it feels like year one all over again – I’m going back to building. It could be frustrating, but it’s also exhilarating and exciting because you get players to step up and play different roles. We’re big into understanding our identity, and we’re developing later than we have in years past. Right now we’re a work in progress, and it’s exciting.

If you weren’t a basketball coach, what would you be?