“You’re looking fat on the court. You need to lose some weight”

-no friend of mine

Boy, if you don’t get off my damn line….what you think of me in my uniform is honestly none of my concern. Secondly, 45 minutes in a game for the books, and this is what you’re bringing to this conversation? Clearly, I’m engaging with the wrong person. Gut feelings are important, because I convinced myself to call said individual even though we have no real foundation to our “relationship.” We met through mutual friends when we were pre-teens, and we had never spoken on the phone before the aftermath of March 24. I made up some BS excuse to hang up before getting real with myself: I was taken aback by the comment, because not looking like a lot of my other teammates, and female athletes in general, was a burden I bore all season. Plus, I am a lot more familiar with the term ‘THICK.’

Before I continue, here’s a note for all of my young ones: EAT SOMETHING BEFORE GAMES/SCHOOL/PRACTICES/WORKOUTS, EVEN IF ITS SMALL. THERE IS NOTHING CUTE OR BENEFICIAL ABOUT NOT GIVING YOURSELF A CHANCE TO MAXIMIZE YOUR PERFORMANCE OR FEELING NAUSEATED/DIZZY/LIGHTHEADED, ETC, BECAUSE THERE’S LIMITED FUEL IN THE TANK. Those annoying people who encourage eating things with at least some nutritional value regularly, and those cheesy, colorful infographics with the food groups and recommended daily values and such, are meant to serve you. So please utilize them to the best of your ability. Also, please note that this is my way of giving you a stern talking to 🙂 If you have questions about what you should eat, or something like that, hit my DM and we’ll chat. If I don’t have answers, we’ll find some.

In the world of high-level collegiate basketball, there are certain expectations: the point guards are supposed to be small, but not too small, and fast; the wings and four players have the most variability, but ideally they are tall, with muscular frames, and athletic; and the five players are supposed to be big and solid. Where does a 5-9 point guard with a butt and thighs, who isn’t particularly dead-sprint-speed fast but is quick enough to get the job done, fit into it all? I don’t know, nor do I spend time wondering nearly as much these days (probably because I’m not in season), but I would love if I wasn’t always reminded of my anomalousness. If I’m getting the job done, let’s leave it at that. Hell, even if I’m not, keep it, please.

I felt compelled to write ‘THICK’ weeks ago, but I failed and tried some more and failed again, and nearly 50 days after our final outing, I’m still uneasy about letting the world in on my love-hate relationship with food, and my brief courting with throwing up after small-scale binge-eating — it all seemed and still seems too grim for the moment. Jannae didn’t raise no punk though, so I’m going to speak my truth because why not? Someone is going to feel me. *crosses fingers*

No one asked, but I’ll say this: “Hey thickums” doesn’t make me feel desirable; I feel like a sore thumb. Something for people to marvel at and comment on, and that’s not my vibe. “Thickums” is way played out, and maybe I am the only person who fits the criteria that absolutely loathes hearing it. I don’t go around commenting on anyone’s body, because you never know how people perceive themselves. I’m all for self-love, and who am I to influence such a fragile piece of material with words on a sensitive topic such as body composition? Pro tip: refrain from making comments about someone’s body, even if it feels complimentary.

No girl with a butt and thighs like mine will call me “thick”, and they can say the same for me—it’s usually the skinny/thinner shawties who make these comments. “Thick Madams” (a term coined in Phat Girlz, in 2006, one of Monique’s lesser-known films that has a special place in my heart) don’t say to their fellows, “girl, you thick.” If we do, it’s our reality, and an unspoken understanding of acceptance and appreciation. Now a TM like myself may say something along the lines of someone being super slender, damn near in a whisper due to my reluctance, if it were to come up in conversation organically, but NEVER do I approach anyone of any kind of build commenting on their bodily contours or lack there of— it’s not my place. “Girlllll, you looking slimmm” to the small-framed girl who has always dealt with people trying to shove food down her throat because she looked “unhealthy.”

“Them pants making you look real stick pooh”…the horror, right? Drake’s, “cause we want to be them and they want to be us”, an allusion to rappers wanting to be athletes and vice versa, fits here. The Slim Jims want to be thicker, while the TMs jump to put jeans on and know pain. From the offenders, on both ends of the spectrum, for a little compassion is all I ask. If this is not a reasonable standard for you, please let me know and I will swiftly distance myself because no, that’s not going to work for me. When people make comments of this caliber, I eek out a smile, and hope that it’s the end of that conversation. I happen to like the way I look in the mirror, and this is a newfound achievement. My body is far from perfect, so don’t have me out here telling lies, but I love it. 10/10 would smash. I worked hard to get to this point, so my self-image is precious cargo—she is not to be finagled with, understood? Sidenote: if you’re not going to be your own cheerleader and biggest fan, then who is? I am assuming that role in this piece (and in my everyday happenings too, of course).

“Thick-fit” is a term I was introduced to in an ESPN article about Beyonce while watching ‘Homecoming’ at the height of the pandemic. FYI: Beyonce Knowles is by no means a standard to which we mere mortals should compare ourselves, but you get the point. As much as I love that term, if it’s okay with all of you, I’m going to officially retire the word “thick.” I hear it too damn much, and frankly, I’m sick of It. I began Vol. III of my little black book – LBB or Journal for short – saying this: “I had a dream/nightmare that people kept calling me thick, and I remember how flustered and irritated I became.” It haunts me in my dreams — go figure, but I don’t know how to politely say, “please stop pointing out the size of my lower extremities without first considering my forced attempts to throw up because stress was eating me alive, and I wanted to fill a void, and food seemed to be the answer to my problem, but I didn’t want to gain weight. Again.”

There were days during this past season where I would eat only one meal. One meal for the average person isn’t necessarily cause for concern, but for a collegiate athlete who is going through several hours of practice and lift as well as doing extra work, you need to fuel appropriately. On countless occasions I waltzed into the kitchen, peered into the cabinet and fridge, and more often than not, slipped back into my room empty-handed, shutting the door behind me. I rarely ate a post-game meal. Now that I mention it, I barely ate pregame. One thing about Texas A&M women’s basketball is that they do take care of us, so my lack of food consumption stemmed from no other source outside of my personal battles. Well, except for that time she-who-shall-not-be-named didn’t order me any food because Chick-Fil-A was our pre-flight meal, and I’d never put in an order because I’m not finna eat a tortilla with raw vegetables on it if I can help it. She told me to “pick through the boxes” — girl, I will fight you. However, being the person I am, I walked away laughing out of disbelief. Needless to say, I don’t mess with sis anymore.

We live in a world where thick thighs and peach-shaped bums are praised, but a healthy backside all of a sudden becomes reason for criticism if you exist under the whistle. The pressure to present a certain way caused me – someone who isn’t predisposed to in a “suitable” manner – to poke, to prod and to manipulate in order to quiet the ignorance, the lack of empathy, the ill-manneredness of some people….and I should chill before I get mad. I don’t walk around the locker room in typical post-practice garb, i.e. a bra and spandex, because I don’t want to bring attention to my body. I changed my bloody uniform top and shorts on national TV at a clock-able rate during the NCAA Tournament. Would I change my body now that I’ve fallen in love with she? No, and shout out to mommy on that one, because I’ve struggled with body image for as long as I can remember. But that’s beside the point.

If nothing else, I hope this rant – and my play on the biggest stage – revealed that someone who doesn’t necessarily fit outdated expectations has a chance to do something special when adequately prepared to handle business where the lights shine the brightest. Just to reiterate, I think it’s time for “thick” to be laid to rest. She had a good run, but like every other phrase, word or onomatopoeia with which mainstream culture has blessed us, she has been wildly overused and abused. As part of the “my thighs hope your thighs have a wonderful day” club, even if you continue to throw a heavy stamp like that around with other people, I’d personally rather not be referred to as such. Respectfully.

Texas A&M junior guard Jordan Nixon is a New York native. She transferred to the Aggie program in 2019. 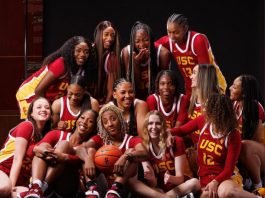 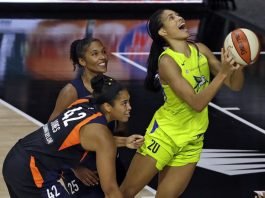 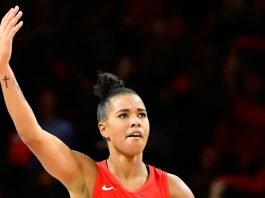 Better planning, care by the WNBA could alleviate travel issues