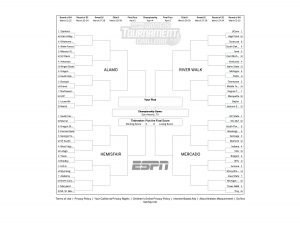 There were no surprises Monday as the NCAA Tournament bracket was revealed for the field of 64 teams, for the first time since 2019.

Stanford, which spent the first half of the season ranked No. 1, was given the top overall seed. South Carolina, Connecticut and NC State were the other top seeds in their respective regions – all of which will be played in San Antonio and San Marcos, Texas.

Both the Cardinal and the Huskies enter the Tournament on 14-game winning streaks. Stanford’s Tara VanDerveer is the most winning coach in Division I history, and UConn coach Geno Auriemma is the second-winningest. The Gamecocks won the SEC Tournament and the Wolfpack took the ACC Tournament title.

The Cardinal, who head up the Alamo region, clinched the Pac-12 regular-season title and the Tournament Championship for the first time in 2014. They spent nine weeks on the road as COVID protocols in their home county prevented them from practicing there. Both VanDerveer and her players have said that playing the Tournament in a bubble format isn’t unlike what they’ve already been through.

“I’m excited, were real excited to be going to Texas and not worrying about who plays where and regional everything,” VanDerveer said. “Just go down there and duke it out.”

Stanford plays 16th-seed Utah Valley Sunday. Though it is their first No. 1 seed since 1996 VanDerveer said she is unconcerned about the seeding of either team.

“What I really tell our team is seeds do not matter,” she said. “It’s not like you get any extra points when you show up at the gym.”

Also in the Alamo region is third-seeded Georgia, which upset Texas A&M in the SEC Tournament to reach the title game, where they lost to the Gamecocks. It was the first conference final for the Bulldogs since 2004, and this is their highest NCAA Tournament seed since 2007.

Coach Joni Taylor said she expects her veteran roster to make a deep run in the field.

“You know we are dangerous. We have a lot of depth, and on any given night it could be anyone that could be a difference-maker for us,” she said. “So far we have all been ready when our number has been called.”

Taylor said the seniors have done an exemplary job in leading the team through adversity for the past year, and as a result, Georgia enters the Tournament with the right attitude.

“We have a fun group and we have a lot of fun, but when it’s time to get down to business we’re are able to do that,” Taylor said. “I think the balance of enjoying the moment and enjoying each other, but also being able to put our hard hat on and get to work has allowed us to be as successful as we’ve been this year.”

The Bulldogs play Drexel on Monday.

In the Mercado region, Texas A&M has the 2 seed behind UConn. The Aggies, 23-2 overall, came into the SEC Tournament with just one loss. Center Ciera Johnson said Georgia outplayed them in the semifinal game.

“We weren’t locked in and they were, and it showed,” she said. “We know every day coming to practice, we’ve got to handle business.”

Coach Gary Blair said A&M will be ready to counter a longtime problem.

The Aggies will face No. 15 Troy on Monday.

Seeded sixth in the same region is Rutgers, making their 26th NCAA Tournament appearance and 17th behind Hall of Fame coach C. Vivian Stringer. She credited the team’s seniors for guiding them to the tourney after a Big Ten Tournament semifinal exit.

“We have nine freshman, the youngest class in the country,” Stringer said. “But the senior leadership is so important, and can only be done when you have that kind of leadership and the kind of respect the seniors have given to us.”

The Scarlet Knights were 14-4 overall, and finished the regular season on a nine-game winning streak after coming back from a month-long COVID pause. It was their longest conference streak since 2004-2005.

They are led by Arella Guirantes, First Team All-Big Ten and Big Ten All-Defensive Team player. Other top performers include freshman Diamond Johnson, Tekia Mack, Mael Gilles, and Tyia Singleton. With a productive roster, Rutgers could make a deep run in the Tournament. They take on 11th-seeded BYU Monday.

Tennessee earned the No. 3 seed in the River Walk region, and will kick off play Sunday against Middle Tennessee. The Lady Vols are the only team to have been in all 39 NCAA Tournaments. Senior Kasiyahna Kushkituah said she feels a responsibility to win.

“It feels amazing to be a part of something as great as that. I just saw it as well and I was like, ‘Wow, 39 for 39 that’s crazy!'” she said. “To be the only team to do that… I’m just grateful to be a part of this program and have Lady Vols on my chest and wear it proud every day. I know the whole entire team is proud as well.”

“To be able to continue this legacy and to build on it everyday is an amazing thing to be a part of. I’m so excited for what we can do and just keep building on that.”

Coach Kellie Harper said the SEC Tournament, where they lost to South Carolina in the semifinals, took a toll. Tennessee used the week off to rest and recover.

“We’ve tried to enjoy each other,” Harper said. “We had a practice on the outdoor court, which was fun. We used that as a really light day. We will travel on Wednesday. I know things are going to look different for us when we get down to San Antonio. So, we want to get a lot of the heavy stuff done before we leave on Wednesday, in terms of our practices.”

Iowa, which finished the season with a lot of momentum and a run to the Big Ten Tournament final, is a No. 6 seed in the same region. Coach Lisa Bluder said the Hawkeyes “don’t know much” about first-round opponent Central Michigan, but assistant coach Raina Harmon was an assistant coach for the Chippewas before coming to Iowa City.

Junior forward Monika Czinano said the team is excited about their opportunity.

“It’s our time now,” she said. “The progress we made in the Big Ten Tournament was outstanding, and I can’t wait to see the progress we’re going to make in the NCAA Tournament. It’s so exciting and so fun.”

Czinano said Iowa found their groove at the right time.

“We’re peaking right now and showing people what we’re made of,” she said. “A lot of teams are doing that, so we have to keep rolling and keep it all together.”

Big Ten Conference will be a tough battle until the end

Stanford Cardinal enter season with the tools to repeat