Like the rest of the U.S., former Duke coach Joanne P. McCallie was staying at home last April as the COVID-19 pandemic unfolded. At month’s end, however, she’d produced something most others had not: her autobiography.

The book, “Secret Warrior: A Coach and Fighter On and Off the Court,” is something the longtime coach had wanted to write for years. But it wasn’t until she resigned two months later that she felt the time was right to release it.

The book chronicles her diagnosis with bipolar disorder at age 30, during her tenure as a first-time head coach at the University of Maine, and her subsequent journey to health and wellness. McCallie said the she considers the book a calling for her.

“It’s kind of a coming out not just for me, but for many people who live their lives with (similar) stories,” she said. “This was not a story I felt like I could tell until I stepped away from coaching. I decided it was time to step away from coaching for now and take on a kind of coaching that’s in a bigger sphere.”

McCallie had not been at Maine long when she had what she called “bipolar episodes,” and was diagnosed with the condition. She kept the matter private, due to the stigma around mental health issues. But with growing openness around the subject over the last few years, she said she hopes her experience can serve as an inspiration to others.

“It’s an old story, but an interesting one,” McCallie said of her experience. “There are some dark sides of things that makes sense when you come to the light of understanding.”

Despite her struggles, McCallie didn’t miss a beat with the Black Bears, as she guided them to seven 20-win season campaigns and six NCAA Tournament appearances in eight seasons. She said she owes a lot to the backing from her husband John.

“Without his support and loyalty, I wouldn’t have been able to get to Michigan State,” McCallie said.

She spent seven years as head coach of the Spartans, guiding them to a Final Four appearance before landing the job with the Blue Devils in 2007. Over the last decade, especially, McCallie has noticed what research has found, that young people are increasingly experiencing mental health issues.

“Suicides in young people seem to have increased,” she said. “A former teammate’s daughter took her own life. Another friend’s son took his own life. It came to a point where it didn’t feel right to hold this story in anymore. I want anyone who reads my book to say, if coach P can do this, I can do this.”

McCallie said she wanted to shine a light on a different aspect of bipolar disorder, and create more understanding.

“So much is written about bipolar disorder that’s so negative. I wanted to show the difficult side and the triumphant side,” she said. “I wanted to show that you can be very successful and manage a mental health situation.”

Another stigma McCallie hopes to dispel is that around taking medication to treat mental health disorders. It is necessary for some.

“When you have a genetic issue like I do, meds are part of the equation,” she said. “Athletes have a hard time coming to grips with putting a foreign substance in their bodies.” 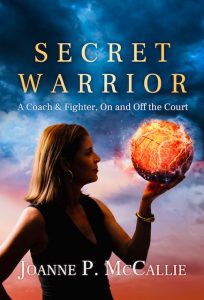 The book’s release Feb. 16 will launch McCallie’s new endeavor, as a mental health advocate. That will include eventually creating a non-profit foundation with her husband that will take a broad-based, multi-pronged approach.

“(The goal is to) bring awareness to bipolar treatment through shared stories and improved funding for treatment options. To (create)….more psychiatric care that is accessible, affordable, and that can help change people’s lives,” she said.

McCallie would like to increase support and resources for nurses and psychiatrists.

“Let’s engage in mental health programs in all communities,” she said. “Collaborate on intelligence regarding research into new medications, and outreach for accurate diagnoses for all.”

The book is endorsed by C. Vivian Stringer, Tara VanDerveer and Ruthie Bolton, among others. McCallie said she is looking forward to her own next chapter.

“I’m excited to tell the story and try to make a difference in starting a foundation,” she said. “It feels like the right timing.”

Presale copies of “Secret Warrior” are available at: coachp.org.