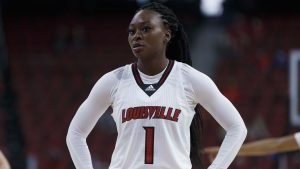 In her three-plus years at Louisville, senior guard Dana Evans has evolved from a solid reserve option into one of the best players in the country. She leads her No. 2-ranked team again this year with 20.1 points per game.

The Gary, Ind. native was the No. 3 recruit in her class, and an All-American. In her freshman year the Cardinals went to the Final Four. Evans blossomed in her second season, doubling her point production to a 10.1 average, setting a variety of personal marks and being named the ACC Sixth Player of the Year. As a junior she moved into the starting lineup, averaged a team-high 18 points per game, and was named ACC Player of the Year and a WBCA All-American. She had lead fast-paced Louisville to an 11-0 start this season, with many tagging the team as National Championship contenders.

Evans has three brothers, and is majoring in sports administration.

Let’s start with your production. You went from averaging 5.3 points per game as a freshman to more than 10 in your second year and 18 last season. Right now your average is 20 points. How have you made such a big and consistent increase happen?

I just continue to work hard. I make sure I make sure I pout the time in, in the gym every day, and stay true to myself. I think also it’s being confident in your abilities is important too because I knew I could do it at this level. I knew it was a process and it wouldn’t be easy, that nothing would be given to me. You’ve got to put the time in, you’ve got to get it on your own, no one’s going to give you anything.

The biggest thing is other girls see people being successful as freshmen and sophomores, right off the bat, whereas, other people’s journeys are different. Everybody’s experiences aren’t going to be the same. Me coming to Louisville as a freshman, we went to the Final Four and won the ACC Tournament championship. Other girls in my class averaging 16 points. It was a challenge for me to understand and stay with the process, but at the end of the day, I knew putting in the work would get me to where I wanted to be.

What makes you good at basketball?

My determination, how I won’t be denied. How, no matter what, I’m going to always give it my all. For me, I always look at it as, I want to win this game. Honestly, I hate losing – that’s not even something I want to discuss. In yesterday’s game, we needed a stop. So how do I get a stop? Just steal the ball. That’s the thing I look at. Last night my three shot wasn’t falling. The game before that I was 6 for 7, but last night I was 0 for 5. I wasn’t going to give up. I just figure, your shot’s not falling, find other ways – get to the basket, get the ball to Kianna (Smith), get the ball to Hailey (Van Lith), find a way so we can still win this game.

What do you love about the game?

First, how it’s my happy place. I can go into a gym and all my problems go out the window. It’s relaxing to me; it’s a getaway. Another thing I like about the game is you can’t get too high or too low. Even though you put the time in, you have to stay humble and realize that this game is going to be ups and downs, there will be highs and lows, but don’t get too high and don’t get too low.

You’re known for your tremendous work ethic. Where did that come from?

First off, I’m really competitive, so I always think of it is as, someone else out there is working, so I should still be working, no matter whether we have an off day or not; I should be doing something.

It’s a challenge for me because I had to learn that you can work hard, but you have to work smart. Because your body is going to catch up with you. Make sure you’re working not just hard, but smart. So my routines have changed because of how my body has responded to things. How can I get these things done without putting a pounding on my body after a few games? We’ve had stretches of a lot of games. So I need to get in there and shoot, but now today’s it’s more like spot shooting: let’s not do anything off the bounce. So for me it was figuring out how to get smart with it.

I would say, my parents. They motivate me so much. They’ve put a lot of time and effort into me, and this game that I love. My mom and dad, seeing them taking their vacation and use it to travel with me to AAU tournaments and events was huge, because I’m like, this is the time when they could be at home relaxing, but they took time out to invest in me. So that’s why I feel like it’s important to invest in me and my game and accomplish my goals of getting to the WNBA. They’ve invested to much in me, so I could make them really proud.

You and freshman Hailey Van Lith play each other one-on-one sometimes. What is your relationship like with her?

In the summer she came, but before she got down here I made it my business to facetime with her and get to know her. Obviously I knew she was really talented, and she’s fun. What I like about her is her really competitive nature – she’s like me. And that works well with the team. When she got down here we would talk about things, and I would show her the way, because I won’t be here next year to help. So I figured I needed to show her the Louisville way. And we compete – we really compete. But at the end of the day, it’s all love, because we’re on the same team and we have the same goals. We would play pick up games and we’d guard each other, and it was good for her and me.

It feels good to mentor someone, doesn’t it?

It does! It’s crazy because I remember being in her shoes, I remember coming on campus as a freshman and thinking, “I’ve got to do all this on my own.”  Having Myisha (Hines-Allen), Asia Durr and Arica Carter do that for me – I feel like I have to give it back.

Your first love as a little kid was ballet. How did you make the switch to basketball?

My mom got me into ballet, and obviously I loved it for a while. But once I got that basketball in my hand, it was over with. In fourth grade, I literally never picked up a call never shot a basketball before my tryout for (my) elementary team. I told my dad I was trying out and he said “the what team?” because I guess he thought it was cheerleading. I told him I was trying out for the basketball team and he said OK. I came home that day and told him I made the team, and he couldn’t believe it. It was over after that.

I still love track, though – I still miss it. But basketball was something I knew could get me a scholarship and something where I could make money off of it.

Did having three brothers make you tougher?

Yes, well, all of us are competitive, so if we play even freaking Uno, we would get into a fight if I lost, because I had to win. I’m not going to stop playing until I win a game. 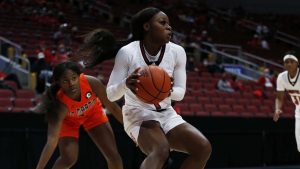 Was playing high school basketball in the state of Indiana as incredible an experience as it would seem to be?

Playing in Indiana definitely prepared me for college because it’s competitive the only challenge was a lot of teams wouldn’t play us. I don’t know if it was because it was a Gary school, but that’s one thing I wish I would have been able to do is play more teams in the Indianapolis area. We just played teams in the region, because they were the only teams that would schedule against us. It was really frustrating. My team and the girl who won Indiana Ms. Basketball, we never got to play each other. So I feel like that’s one thing the state of Indiana can clean up. Players should get a chance to play each other.

In what ways is college freshman Dana different from senior Dana?

Mentally. That’s for sure my biggest thing. Now I’m 22 years old, and I’m a senior. I came here at 18 and didn’t know too much of anything, really; I was just ready to play basketball. I’ve grown as a person. I really feel like I’ve been able to open up more, too. I used to be in a shell, like I like to be by myself – that’s just how I was. Now being a leader of the team, being a captain, I can’t be in a shell; I have to be hands on with everybody. Obviously just be there for people.

In my game, I’ve added a lot. I find any little thing in my game and think, “you could do that better.” Also, watching film. In high school I never really watched film; we didn’t have film sessions. Understanding film now is huge, because now I can look to see what I should improve on.

What have you learned about yourself and about life through the pandemic, and through the social justice unrest that took place?

I’ve definitely learned a lot. I’ve learned that obviously you have to stand up for what you believe in and do it in the best way that’s comfortable for you. People don’t understand that if I support this, I may not support it in the way you support it. We can both support the same thing, but maybe I support a different aspect of you because that’s the way I want to go about things.

The biggest thing people need to understand is that life isn’t fair. Everybody does not get treated the same, but it’s how you make it, it’s how you make life. Are you going to complain about it, or are you going to try to make a change? It’s what you do about it. People get too caught up in, “what is she doing, what is he doing?” Just worry about yourself.

You’ve said many times that you aim to bring a title to Louisville. If the Cardinals don’t win a National Championship this year, will you return for a fifth season?

I’ve been dreaming of getting to the WNBA since I was in the fourth grade. Knowing that’s so close is kind of challenging to turn down, so….

What do you want your legacy to be?

If you could go anywhere in the world for vacation, where would you go, and why?

I would probably would go to either Italy or Hawaii. I’ve never been to either of those places but I’ve heard they’re beautiful, and I have to go.

With their elevated play, can the Dallas Wings contend for a Championship?