Rhyne Howard came to the University of Kentucky after being named the 2018 Tennessee Gatorade player of the year, and Miss Tennessee Basketball. She was the unanimous national freshman of the year after averaging a team-best 16.4 points and 6.6 rebounds, and she broke several school records. As a sophomore, Howard scored 633 points and was the second-highest scorer in Division I, averaging 23.4 points per game. She became the first player in Kentucky history to score 25 or more points in five consecutive games, and was also the first to have 37 points twice in a row. She broke a pinky finger midseason but only missed three games, going on to eclipse the 1,000-point career mark. Despite being nominated for numerous awards, she was not named an All-American last season.

Howard, who grew up in Chattanooga, is one of five children. A digital media and design major, she tends to be on the quiet side, preferring to let her game do the talking.

It seems like being underestimated is a theme in your life. You were passed over as an All-American during your senior year in high school, and you came to Kentucky and smashed things up your freshman year. You continued that run as a sophomore, yet were overlooked last spring for the All-America team. Why do you think you’re underestimated?

I feel like I’ve always put my best foot forward and worked hard to try and reach these achievements. I guess people just don’t feel like I’ve been working hard enough, maybe. But I just know I can always bring more and I’m going to work harder this year to prove that I can and will be an all American.

Does being underestimated motivate you?

It definitely motivates me.

You’re a quiet person and don’t do a lot of talking. Do you think that might be a reason you are sometimes overlooked?

It could be a part because I don’t feel the need to talk highly about myself. The people around me – my coaches and my teammates – they can vouch for me. It’s never really been in me to brag abut myself, but if I do feel the need to then I will have something to say.

Coach Matthew Mitchell retired suddenly a few weeks ago. How did that make you feel?

It was definitely saddening for all of us; nobody was really expecting it. Honestly we were just thinking he would take just this year and just come back. But he did say he’s not going anywhere, and he’ll always be here to support us. That we can always text him or his wife Jenna – that they’ll always be there for us.

How do you enjoy working with (special assistant to the head coach) Lin Dunn?

She’s great. She always puts a smile on everybody’s faces. But she’s also there to make sure everyone gets everything done. And if she sees something she thinks will help us, she’ll text us. Things we can do better or things we should keep doing. It’s great to have her.

Don’t you love it when the older set texts?

How do you approach the game? What is your mindset going into a season, a week, gameday?

I don’t like to overlook anybody, because anyone can come in and outwork you, just as easily as you’ve been working yourself. I always think, just go out as if this were a championship, or if it were your last game, because it could be. I always go and put out my best effort and make sure

I’m doing what I’m supposed to be doing, helping my teammates as well, and making sure we’re all on the same page.

What are your long-term and short-term goals?

I pretty much keep the same goals every year, which is player of the year, All-American – things I know I can achieve. For little goals I take them by game. Like I might go to coach Amber and say, this is what I want to do. And I’ll throw out numbers and stuff, or with Elzy I’ll say, maintain a fast pace throughout the game and not let fatigue set in.

Are you superstitious? What’s your pre-game routine?

Yes and no. I do have the same routine before games, which is, after pregame I put on the NormaTek boots and take a nap while I listen to music.

What do you think makes you a good ball player? What would you like to improve about your game?

I think it’s my basketball IQ. I see things ahead of when they happen. I know where my teammates are going to be before they go. I know what plays to make and when to make them and I like to keep everyone involved.

Sometimes I do settle, and it could be a bad thing because sometimes my teammates might need me and I’m chilling in the corner because I let fatigue set in. So I need to make sure I’m going harder all the time. Being there to encourage my teammates and letting them know I’m there to make the play if they need me to.

How do you assess yourself?

I re-watch every game after we play and I watch myself. I try to capitalize on it for the next practice, and for after that.

How did you come to start playing basketball, and at what age did you start? When did you know basketball was for you?

I really stated playing basketball in the third grade, but my mom played, my uncle played – a lot of people around me – so it was a given that I’d play too. When I started playing my mom was coaching me and since then it’s been my love, my favorite sport. I’ve played other sports too, but basketball was always the favorite.

Did you do track?

I did track and cross country, actually.

When did you know it would be basketball for you?

How did you keep your workouts going during the nationwide stay-at-home period last spring? How did you spend your down time?

My trainer ended up getting a gym, which was very fortunate. So I’d go in 3-4 times per week and I’d stay in there because I like to get shots up. So three hours every time. We’d work on shots finishing moves, going against defense – all types of stuff.

Did you work on conditioning?

I worked on game conditioning.

What did you do on your down time?

I watched Netflix and played video games – that’s pretty much it.

What have you learned about yourself during this challenging year of 2020?

I’ve definitely learned that I can fight through adversity. This is a tough time for everyone and some people handled it different. I looked at it as a time to get better and focus on myself more since I have all this time. And just not lose sight of what my goals are and just keep working for them.

What are some of your interests outside of basketball?

I definitely like to draw. During quarantine I started playing piano more. I’d look up songs on Youtube and try playing them.

Who are the most significant influencers in your life?

First, it would be my mom. She got me started in the game and always made sure I had what I needed and had the opportunities. In high school it would be my coaches, my teammates definitely the Hughes. My family is always there for me, they’re always going to support me whether I do bad or good. All the support staff here at Kentucky – my teammates and coaches. Everyone wants to see me do well.

What are your goals in basketball? What do you want to do after your basketball career is over?

I definitely want to play in the WNBA, so my goal for that would be rookie of the year, and helping my team to win a WNBA Championship.

You’re all about improvement at all levels, a growth mindset.

Yeah. Coach Elzy is always telling me what I’m no where near where I could be. So I’m just constantly trying to get there and prove that I’m not staying static.

What do you want to do with your digital and design major?

I was thinking like a creative director, creating posters for recruiting.

What is one thing most people would be surprised to know about you?

I guess that I like to ride horses. And I want a pet chinchilla. I can’t get it now, but eventually I want to get one.

What music do you listen to? If you had a pregame playlist, who would be on it?

I like to listen to the 90’s stuff, like 90’s R&B. So when I’m taking my nap I put on R&B. I feel like this generation’s music is so strange. I just want to vibe to some music from back in the day.

Is there a theme for the year?

I think for us it’s just we’re still big on social injustice. We’re definitely going to make sure we keep using our platforms. We’re going to be playing for coach Mitchell as well. We’re going to stay together and always back each other.

What have you and the team been doing for social injustice?

We’ve done a lot – especially for Breonna Taylor, because she’s a former Wildcat. We’re going to use her picture for our game ticket (dividers). The SEC has these patches that say unity and equality that we’re getting on our jerseys. For Kentucky we’re trying to get custom shoes that are black and blue. 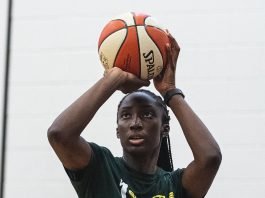 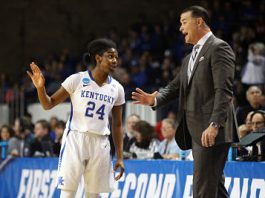 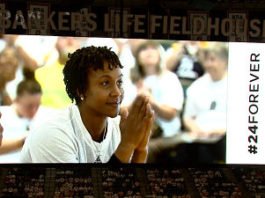