In her 11th season, two-time WNBA champion and three-time All-Star DeWanna Bonner is wearing a new jersey for the first time. After playing her entire career with the Phoenix Mercury, Bonner signed with the Connecticut Sun as an unrestricted free agent in the offseason, joining a squad that finished last year’s campaign as the second-best team in the league after falling in the Championship finals.

Bonner was one of Auburn University’s most decorated athletes, starting in all games she appeared and setting a new school career scoring record by the time she left. Phoenix drafted her with their fifth pick in 2009, and Bonner quickly became a motor and a creator for the team. She ranks second on the franchise’s all-time scoring list, with 4,820 career points, behind only Diana Taurasi. Bonner has missed just five games over 10 seasons, was consistently one of the team’s top two scorers and rebounders, and she has been an energy leader on the floor.

With the Sun this season, Bonner is the team’s leading scorer at 18.3 points per game, to go along with 7.4 rebounds, 3.1 assists and 2.2 steals per outing. She was named the Eastern Conference player of the week this past Monday.

Bonner missed the 2017 season, as she gave birth to twin girls that July. Her father, Greg McCall, is the head coach at Cal State Bakersfield and her sister, Erica McCall, plays for the Minnesota Lynx.

This year you went from Phoenix to Connecticut. What went into your decision to go there, and how are you liking the fit so far?

I saw this team get one step away from the championship, and they want to bring one to Connecticut. I’d like to be a part of that. It’s never been done before. So hopefully we can make that happen. Also, I knew the president, Amber (Cox). I’ve known her for a long time, as she was with me in Phoenix, and she drafted me there. So it’s pretty cool, you know, to come back and work with someone I know, a familiar face where I know I’ll be taken care of, and my girls too. So for sure, those two factors were huge.

Now, you’re a decade into it. You’ve always been productive, and have won Sixth Woman of the Year three times. But with the upper echelon stuff, you haven’t gotten your due. So how do you personally feel about where you are in your career? And what keeps you motivated to keep going?

In Phoenix I played with two great players in Diana Taurasi and Brittney Griner, so I kind of flew under the radar there. But we won a championship, so that was my main goal – not so much the individual accolades. I loved Phoenix, that was like my second home, it was great there. But I think now I’m kind of coming to Connecticut in a little bit of a different role. I had Diana to give the ball to in important moments, and now it’s my turn. Hopefully, I can deliver and be the same player and produce here and hopefully, like I said, bring the championship to Connecticut.

Speaking of your game, the technical aspects of it: you’re 6-4 but you’re not in there overpowering people in the low post. You’re smoother, you’re more wiry, you’ve got a lot of versatility offensively and defensively. How do you get that done as someone with a different frame?

Oh man, I have to use my speed! A lot of people are a lot stronger than me. I have to use my speed when I can, when they’re playing off me shoot, or pull up. Anything. I just tend to take what the defense gives me. But definitely, the league is physical. So I try to stay out of there with the big girls. They bang, but I’m not a banger. I try to run as much as I can.

Your sister is in the league with you, and on Twitter, I have been cracking up because folks really don’t seem to understand that you two are sisters. But she’s moved around a little bit recently and started getting some pretty good minutes with Minnesota. What’s it been like watching her play and watching her growth in the league?

Man, I am so proud of her. Her story’s a little different, her journey’s a little different from mine. For her to just stay positive, stay ready and come in and contribute when she can, that says a lot about her and her character. It’s been a whirlwind for her in this bubble. She started out on one team and then ended up in Minnesota. So for her to come in and just take it in stride, that’s not easy to do. So I’m just super proud of her. That’s just the big sister talking. But basketball-wise, she’s just she’s one of those bruisers, man. I stay away from her too!

Did you have those battles coming up, or was she still too young to play against you?

Yeah, she was a little too young. And we don’t really guard each other when we play each other. But I’m super proud of her.

Your dad, he’s a big basketball guy. Is he how y’all got into basketball? How did that spark start for you?

My dad went to play basketball in college in California, and I’m from Alabama. It’s just something that I can’t say I really grew up around because he was gone, but it was just like an ‘in the blood’ kind of thing. It was something that I started doing and I loved at a young age. And of course, he guided me through it all from high school to college, and we really got close. My senior year in college he was I like my best friend so I come to him for pretty much everything… basketball, life, and he keeps me grounded.

And speaking of family, you’ve got the babies. We can’t not talk about the babies. How has having them changed your perception of the game?

I can say there’s no greater feeling than after you come home from a game, when you’ve had one of those tough games. And they’re just smiling and giggling in your face. They make you forget everything. So for me they’re kind of my calm, they’re my calm to the storm. You always have this pressure about how you perform, but every time I walk off that court, they love me no matter what. So they balance me in that way. There’s definitely no greater feeling than being a mom. They’re amazing, great babies.

In Connecticut, do you feel like the franchise itself and the staff are pretty accommodating and have been cool about the kids and everything?

Oh absolutely, from the minute that we started talking. Everyone knew my main focus was my babies being comfortable. Unfortunately we’re not in Connecticut of course, so some things that they were planning to do for me and the kids are on hold right now. But even now, if I need anything I can take it to them. I couldn’t have asked for a better staff in that department.

Las Vegas with another fiery game 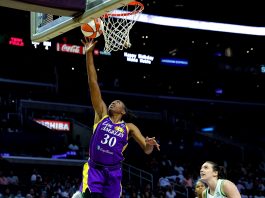