For the second time in three days, the Chicago Sky notched an impressive win without key players.

Tuesday was perhaps the biggest surprise, as the Sky routed the high-powered Los Angeles Sparks, 96-78, without two of their starters.

Diamond DeShields played limited minutes again, due to injuries, and forward Stefanie Dolson was out. But Kahleah Copper stepped up once more, delivering 21 points, and Azura’ Stevens also added 21. It was a statement win for Chicago.

Wade was impressed with his team’s unselfish play.

“It’s the second game that we’ve had 25-plus assists. And so, people are going to see us scoring, but it’s actually the way that we’re scoring,” he said. “We had 25 assists on 37 to 38 field goals. And that’s how we want to play. We want to be a team that moves the ball and be multiple threats. But we also want to be a team that shares the ball. So that’s important for us.”

The Sky jumped out to a 12-3 lead to start the game, and Los Angeles answered with a 16-3 run. It was a back-and-forth contest until the second half, when Chicago mounted a lead in the third quarter and never looked back.

Brittney Sykes led the Sparks with 16 points off the bench, while the rest of the team’s lineup was relatively quiet.

The Sky shot 54 percent in tallying their largest win over Los Angeles in franchise history. But their ability to share the ball was key.

“We really have like true genuine team chemistry,” Stevens said. “And I think on this level that’s really important because a lot of teams don’t have that. But we really all played together, any night, it can be anybody’s name, and we have balanced scoring, we share the ball really well. We hit open people.”

Center Cheyenne Parker said the team’s versatility has taken them to another level this season.

“I think it’s a really great thing that all the bigs have range on our team and that’s kind of what makes us special,” Parker said. “It’s tough to guard all five, especially when there’s penetration. When there’s penetration you have to help, and that leaves somebody open to knock down the shot.”

Earlier in the day, the team announced its partnership with Athletes for Justice for an initiative called #SkyTakesAction. Chicago players will pool their money and donate $10 for every point scored, $100 for every win, and $50 for every loss to #SkyTakesAction. The proceeds will go to help five organizations in the city: By the Hand Club for Kids, BYP100, The Movement for Black Lives, Firehouse Community Arts Center of Chicago, and Future Ties. Fans are also encouraged to donate at mightycause.com/donate/A4jxchicagosky to support Chicago communities. With their victory over Los Angeles, Sky players will donate $1060 to #SkyTakesAction.

“We’re trying to raise as much money as we possibly can,” Parker said. “Obviously, the more money, the better. But just the fact that we are doing something, and we’re taking action as a team, as a program, representing the Chicago Sky. I think it’s really dope that we are taking initiative and trying to just raise awareness and get other people to take action.”

“The whole point of us doing this was trying to get our fans active and get them involved. So, I’m really excited and I can’t wait to see like how it goes, how much money we can raise.”

Chicago has Wednesday off before taking on the Minnesota Lynx Thursday night. 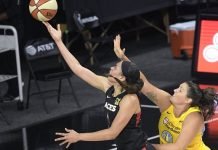 What a newsy kinda day