Aari McDonald announced she would return to Arizona in 2020-2021 for her final year instead of opting out and making herself eligible for the WNBA draft next month. In her statement, she promised that “the best is yet to come.”

A few hours later, Chennedy Carter released a statement saying she will forego her senior year at Texas A&M to enter the draft. She thanked Aggie fans for their “unwavering support, love and generosity.”

McDonald broke the Wildcat single-season scoring record – which belonged to her coach Adia Barnes – as a sophomore, as well as the single-game record. This year she averaged a team-high 20.6 points, which was tenth-best in Division I, grabbed 5.6 rebounds and dished 3.6 assists per game. She was the Pac-12 defensive player of the year and a Naismith finalist for the same award.

McDonald was poised to lead Arizona to their first NCAA Tournament appearance in 15 years before the event was canceled March 12 due to concerns about the coronavirus pandemic.

Aggie coach Gary Blair said he and his coaching staff back Carter.

“We support Chennedy [Carter] in this decision,” he said. “Chennedy has done as much for Texas A&M in her career as any young lady that has played here. We believe she will be chosen high in the first round of the WNBA Draft, and will represent Texas A&M, her teammates, coaches and family in a way that will make everyone proud.”

“The decision to go a year before she graduates is the same as a player making a choice to go to the NFL, NBA or any other pro league. The timing has to be right, and we believe the timing is right for Chennedy to move her game to that next level. She will be an instant success as a professional for whichever team drafts her. We wish her the best of luck as she begins this journey.”

The draft will be April 17. If drafted in the top four, as many predict, Carter would become the highest-drafted Aggie in program history. 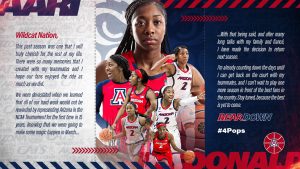 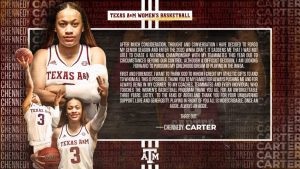