Jennie Baranczyk enters her seventh year as Drake’s head coach after being named Missouri Valley Conference coach of the year each of the previous two seasons. The Des Moines native and former Iowa basketball standout has guided the Bulldogs to four straight 20-plus win seasons since 2014-2015. Drake finished last year with an 18-0 conference record and a 42-0 winning streak that dates back to Baranczyk’s fourth season there. No team in the conference had ever had back-to-back undefeated years.

Baranczyk played for the Hawkeyes and coach Lisa Bluder. She was a three-time All-Big Ten Conference selection, and was the only player in Iowa history to finish in the top 10 of five major statistical categories: points, rebounds, assists, steals and blocks. She is one of only two in program history to score more than 1,700 points and grab 800 rebounds.

Before coming to Drake, Baranczyk was an assistant coach at Kansas State, Marquette and Colorado. She and her husband are the parents of three young children.

What was your approach to building the program at Drake when you arrived? What steps were involved?

First you get there and think you have all the answers, and then you realize you don’t. My situation was unique because I started two weeks before my due date with my first child. You plan and prepare to be a head coach, but you have to constantly adjust. We looked at a lot of the major programs that were successful, and we took some ideas from each coast. Other teams had their niche, and we had to figure out what our niche was. Drake is a private school and it’s not an easy school, and it’s also in the Midwest, so players have to have that work ethic and competitiveness to motivate them. At the time I came, we had zero players on the roster from Iowa. It was really important for me to change that, and to focus on getting in-state talent in recruiting. I never took the approach that I needed to come in and change things or make them better. Nothing was bad or wrong, but we’re just different now. I had to figure out who I was as a leader, and focus on that.

It’s not my chess match – it’s theirs. I want them to love this game, and I want them to make reads. They have the green light. When I played I knew I was at my best when I had  fun. It’s not out job to tell them what to do; it’s our job to put them in positions to figure it out. Our way at Drake is not the right way – it’s the right way for us. There’s a big difference.

How would you describe the style of your team? Do your Bulldogs have signature characteristics?

I think we’re really selfless, and we have fun playing. We do a pretty good job of sharing the basketball and having assists. people say we’re good passers but if you came to our practice you’d think we were the worst. group of women have fun playing.

Every good coach says there is always something to work on. How is your approach seven years in different from how it was when you began?

Every year you realize you need to spend more time with your players, to understand how they’re motivated and how to help them find their own light. Every year you have to remind yourself you have to be in a good space for that to happen. I’m the biggest culprit for not taking my own five minutes for a timeout. I can get caught up in things; I can get paranoid about things.

Not every exceptional player transitions into an exceptional coach. How have you been able to translate your athletic career into coaching?

I wasn’t that exceptional. I wasn’t someone who had natural ability and was just better than everyone. My niche was that I was competitive. We’re all competitive, but I was really competitive. Lisa Bluder does a good job teaching the game of basketball. My dad was a great teacher of the game, too. He told me to have fun and keep learning. And I had Hall of Fame high school coaches. I was very lucky to be surrounded like this.

In Iowa we have great fans here. We have high school games with thousands of people coming to watch. The state tournament when I was in high school was packed, with every tournament in the same place in the same week. We’ve got a great history.

How has your experience as an athlete helped you in coaching? Do you feel like you understand players better because of that?

The older you get, the farther removed you are and the better you were in your mind. I used to get so angry when someone would miss a layup that I’ve missed plenty of times. (Iowa assistant coach) Jenni Fitzgerald said, “they’re never going to work as hard as you think you did.”

When did you know you wanted to coach? What do you enjoy most about it?

I never had a defining moment of wanting to coach, but I never had a moment where I wasn’t one. The point guard is the boss on the floor, but I was never a point guard. Yet, I always had a natural ability to say what I think. I loved timeouts where you could say what you were thinking, the coaches said what they were thinking, and you figured it out together. I assumed that’s the way everyone did it.

You were an assistant at three good schools before coming to Drake. How did each stop help prepare you to be a head coach?

My first job was with (Kansas State coach) Deb Patterson. Nicole Ohlde and Kendra Wecker were seniors, and it was a cool time to be there. Deb was a great motivator, and she met each player where they were at, and it was fascinating for me to be able to see that. The beauty of what I learned there is that in my first year there it was a veteran team. The next year they played all freshmen. I learned the philosophies of what you do with veteran and new teams, and the differences. Then I went to Marquette to work for Terri Mitchell in an established program. She is a special person in principle, based in core values, and sees the bigger picture. That was something she talked about a lot. I was able to take some of those concepts. Then in Colorado it was completely different, with a brand new staff. Two weeks after I got there, they went to the Pac-12 Conference, and I had to come out of my comfort zone and go and figure it out. That experience gave me an appreciation of basketball across the country.

This may sound crazy, but we never talk about winning, ever. We never talk about a record; we literally just talk about loving what you’re doing. I really want them to love the game. We expect them to give back to the game in some capacity when they’re older. Young boys and girls need to love it and see the beauty in togetherness. Someday they might replace basketball with something else, but while they’re here I want it to be a part of them. I talk about competing, and we have some moments where we’re good and some where we could be a lot better.

I don’t want women to think of themselves as second class, as victims. I just want them to bring it every day. It’s about loving Drake and loving where you’re at. I don’t know how many of our women will go pro, but I need them to love what they’re doing, have fun and be good role models.

How do you balance raising a family with a demanding job?

You don’t. I think balance is this word that every culture uses and no one really knows how to define it. You do the best you can. I have a great husband and I have family here, and that’s helpful. My kids have meltdowns, and others see me as a real person. It’s hard, and it’s amazing.

If you won the lottery, what would you do?

I don’t know what I would do much differently than what I’m already doing. We’d have a better budget, we’d charter more flights, and those kinds of things. But I really do love what I do, and I really do enjoy it. 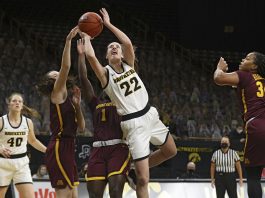 Clark fitting in, filling up stat sheets and opening eyes for... 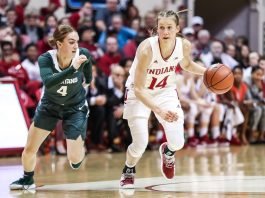 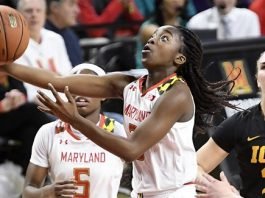