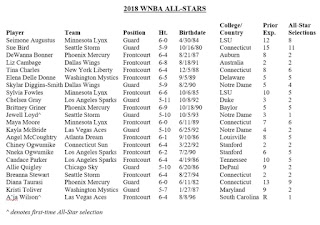 The All-Stars were announced tonight on ESPN’s SportsCenter. Under the new All-Star Game format that replaces the traditional matchup between conferences, Delle Donne and Parker will select their respective teams from the pool of remaining All-Stars to form two 11-player rosters. Delle Donne will make the first pick and Parker will have the second pick. The two captains will then alternate picks until all players have been selected.

The rosters for Team Delle Donne and Team Parker will be revealed on Thursday, July 19 at the start of ESPN2’s telecast of a game between Washington and the Dallas Wings (8 p.m. ET tip-off). On Friday, July 27, the All-Star team captains and head coaches will meet to determine the starting lineups. The starters will be revealed that night on ESPN2 (7 p.m. ET) during a live telecast of the WNBA All-Star Welcome Reception in Minnesota. Seattle head coach Dan Hughes will lead Team Delle Donne, while Phoenix head coach Sandy Brondello will guide Team Parker.

The All-Star Game enters Minneapolis with a twist.

How will the new All-Star format play out?

Maya Moore was chosen as a captain, but declined.

Sue Bird has set a WNBA league record with her 11th All-Star selection.