All rookies must adjust to life in the WNBA when they enter the league.

Sometimes, so must their parents.

Such is the case for Roscoe Wilson Jr., father to No. 1 draft pick A’ja Wilson. Fans know Wilson as an NCAA champion and now, the WNBA’s second-leading scorer as a rookie, with 20.6 points and 8.5 rebounds per game. But her father, who played professional basketball for more than 10 years overseas, introduced her to the sport as a child and became her skills coach and trainer.

In her early playing days Wilson wasn’t very good, but Roscoe Wilson saw her potential, and kept pushing her.

“When she played AAU, she was absolutely terrible,” he said. “So I said ‘A’ja, this is costing me $5,000. You’ve got to show me something.’ I told her I would give her one more year, that I would work with her.”

As Wilson became better, her love for the game grew stronger.

The prophecy came true, as Wilson has become seemingly unstoppable in her professional debut. She is assumed to be a lock to win rookie of the year honors. But Roscoe Wilson is working on stepping out of the picture and leaving the instruction to Aces coach and former Detroit Piston Bill Laimbeer.

“I’m transitioning to just being her dad and not necessarily her trainer,” he said. “Because Bill told me ‘I got her now, she’s cool,’ and I said ‘alright.’ And it helps me out because every time I’m around her, my voice goes out.”

Though Wilson is on her way to becoming a household name, that name had humble beginnings, in a European airport.

“I went to a Steely Dan concert in either Sweden or France,” Roscoe Wilson said. “I always liked Steely Dan, and at the concert they had this album ‘Aja,’ in 1977. I just like the song, Aja. And the name, simple – you spell it backwards, forwards, same thing. I said, back then, if I ever have a daughter, I’m going to name her Aja. And I kept my word; when A’ja was born I said, we’re going to name A’ja, A’ja.”

“My wife’s sister was one of the first field nurses in Desert Storm, and she was stationed in Riyadh,” Roscoe Wilson said. “So my wife was five months pregnant with A’ja, and we went back to Europe, to my team. We were in Switzerland, getting ready to fly to Stockholm, and I had Stockholm at this gate and Riyadh at the next gate. So I took it as an epiphany, so I named A’ja, A’ja Riyadh Wilson.”

He said Eva Wilson was alright with the name.

“That’s one of the few things I got my way (with my wife),” Roscoe Wilson said. “It’s one of two things that I ever got my way, was my daughter’s name.”

He has traveled to see two of Wilson’s games live, and has plans for a few more during this compacted season. And he is proud of her accomplishments.

“A’ja has been a very special child,” he said. 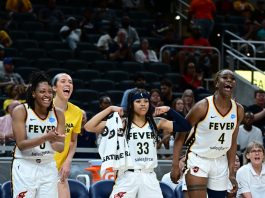 Reason to be optimistic in Indiana 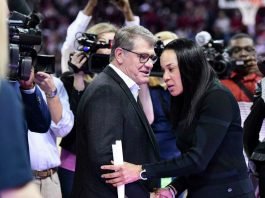 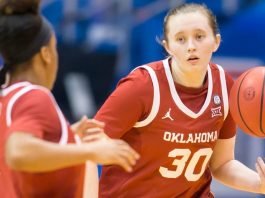 L’s and One: Taylor Robertson is breaking records at Oklahoma