Washington, D.C. – The Minnesota Lynx used a fourth-quarter push to get past the Washington Mystics Thursday, 88-80, and snap a four-game losing streak.

After the two teams traded baskets most of the game, the Lynx closed on an 11-3 run that began with Rebekkah Brunson sinking an open three-point shot to give her team an 82-77 lead. Moore then made six consecutive free throws to seal the win.

Defending champions Minnesota have been struggling of late, losing more consecutive games than they had in eight years. Point guard Lindsay Whalen said the entire team came together to pull out the win.

“We knew at some point we were going to break through and have a really good game together,” Whalen said. “We know [the Mystics] well and they’ve got some great players, so we knew we had to be focused right from the beginning.”

Moore attributed a good deal of credit for the win to veteran guard Tanisha Wright, who came off the bench and provided a huge spark.

“She adds so much strength, maturity, and poise to our team,” Moore said. “She had some great passes, she was being aggressive, she’s constantly communicating, she adds that extra level of connectedness and toughness to the team.”

Cloud was the biggest bright spot for the Mystics, pummeled by injuries to start the season, including her own. She started the game for the first time on the year.

“[Head Coach Mike Thibault] called my number, so I was ready to start,” Cloud said. “I just had to bring the energy that I bring from off the bench to the starting group.”

Thibault was pleased with Cloud’s performance.

“She keeps getting better as a basketball player,” he said. “That bodes well for us down the road. When Tayler [Hill] comes back, we’re going to have some interesting decisions to make with minutes.”

The contest was close down the stretch, and every time Washington seemed to be making a surge, Wright made a flashy pass or an energy play to quell the crowd’s excitement and the Mystics’ momentum.

“We knew [the Lynx] were going to be desperate in how they played, and they played that way,” Thibault said. “I think we’re getting better, but I think there’s still some shortcomings in that regard in the end.”

The Mystics now hit the road to play the Connecticut Sun next Wednesday.

Another stop on the road to March

The game drama shows no sign of letting up 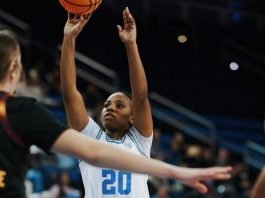