Minneapolis – The Phoenix Mercury’s Brittney Griner and the Minnesota Lynx’s Sylvia Fowles have had their fair share of battles in the paint over the years, including their duel in Friday’s 95-85 Phoenix win over Minnesota.

In the most recent match ups, Fowles has had Griner’s number in both the points category, and on the boards. She has been aggressive on both ends of the floor, forcing Griner to put up bad shots and become frustrated.

But in their first meeting of this season, it was Griner’s time to shine. The sixth-year center scored 21 points, grabbed nine rebounds and blocked three shots, which put her over the 500-block mark for her career. And her performance helped pace her team toward handing the defending champions a shocking third consecutive loss.

“Brittney’s been great for us all season long,” Mercury coach Sandy Brondello said.  “She started off the first 20 minutes in Dallas pretty average, but since then she’s been really strong. And Syl, you know it’s always a strong battle between them, but Syl has had her number, so it’s good for BG to get that success out there.”

Griner didn’t get the quick start she was looking for, taking eight shots in the first half and only converting three of them for nine points. What she was doing better than scoring was challenging Fowles down low, not allowing her to score until 3:16 left in the first half. Griner outworked, out-hustled and outplayed Fowles the first 20 minutes of play, tiring the 11-year veteran out in the second half, which allowed Griner was able to do as she pleased. In the second half alone Griner scored 12 points, making 5-9 shots and adding five more points from the line.

“BG was persistent, Brondello said. “She’s really extended her range. She can face up and shoot those jumpers and that certainly helps. She doesn’t have to bang and it becomes a little bit more of a finesse game. I was really happy with her defense as well.”

Diana Taurasi led all Phoenix scorers with 29 points, while DeWanna Bonner added 24. Maya Moore led five Minnesota players in double figures, with 25 points. It was the first win over the Lynx for the Mercury in 14 meetings.

Taurasi started the game with seven of the team’s first nine points, and Bonner had six easy layups in the first two frames. The duo combined for 36 of the team’s 52 first-half points, with Taurasi adding five assists in two quarters that features six ties and 12 lead changes as the teams traded baskets.

Griner and Taurasi have long been a formidable tandem. Bonner is back this season after sitting out 2017 pregnant with twins, and she looks like she hasn’t missed a beat. Lynx coach Cheryl Reeve called them “the big three.”

The two teams battled back and forth in the third quarter, with Fowles beginning to look more like her dominating self and reserve guard Tanisha Wright hitting a couple of big shots, which included a three-point basket to tie the game at 75 early in the fourth quarter. Moore screamed and high-fived assistant coach James Wade as Minnesota forced a shot-clock violation. The momentum had shifted, but only for a second.

From there, Taurasi hit two straight three-point baskets of her own, and the Mercury finished on a 20-10 run. The Lynx players held their heads as the team walked off the court with a 2-4 record and three straight road games looming.

“She played great,” Reeve said of Taurasi. “She looks great. She’s playing with that level of passion that leads her team. We saw in warmups what she looked like, and we advised our team what we thought should happen and it didn’t. She had a hell of a game.”

Taurasi’s improvement in scoring has been positively correlated with something she is doing off the court. She started doing yoga and meditating and says that has helped her improve her mindset.

“You know sometimes when your mind is foggy, your game is foggy and I was a little foggy,” Taurasi said. “I just had to snap out of it. We work too hard. We come in every single day as a group and work too hard to go out there and play foggy. We had a little clearer minds today, starting with me.”

While the cheering and celebrating could be heard outside Phoenix’s locker room postpgame, the complete opposite could be said about the Minnesota locker room just down the hallway. Moore, usually so full of energy and excitement following most games, seemed upset and distraught. Reserve guard Danielle Robinson faced her locker as media surrounded locker neighbor Lindsay Whalen, and Robinson didn’t turn around. Whalen was lost for the right words – something that is a rarity for the veteran.

“Every journey is different,” Whalen said, finally. “Obviously it’s not what we want. At the end of the day, it’s about getting wins as a team and figuring it out. We have a great coach, we have great players on the team and I think it’s just going to take everybody just doing a little more of what they do on the court and bringing what they can bring just a little more. Just sticking together. We have three on the road now so that’s even more important. It’s a really big stretch.”

The theme of not comparing this season to years previous was heard throughout the Lynx locker room on Friday night as well as the day before on Cheryl Reeve’s podcast that she does with the Talk North Podcast Network.

“Inevitably, when you’ve been successful over an eight-year period, an unprecedented historic run, that they’ll be comparisons of what we are doing now to years past and we don’t do that internally and we think that’s really important,” Reeve said. “That is going to be difficult to meet every single year, and so we only want to judge ourselves by this season and the other 11 teams in the 2018 season.”

“We’re just five games into it, and so I would encourage that we all be mindful that winning a game in this league is hard. We’ve always said it, and now you are seeing it. There is a fine line between winning and losing and I’m really really confident in the group that we have.”

Struggles seem to come to a head in the fourth quarter, as Lynx players have looked gassed and unable to put together stretches of defense to contain their opponents. Runs by those opponents early this season have put Minnesota in a desperate position where they have to play from behind, something the core group of players isn’t used to doing over the eight years, in which they have won four titles.

“It’s something we are going to have to look at substitution-wise, and the minutes,” Reeve said. “Are we having players who make players that are tired? Seimone (Augustus) and Maya to this point in the fourth quarter, statistically, percentage-wise, have not been very good. It’s something we are looking at.”

The Lynx leave tomorrow on a three-game road stretch that could be the toughest of the season. They begin Sunday with a match up against arch rival Los Angeles, to whom they suffered their first loss of the year. From there they travel to Washington D.C. to face the 5-2 Mystics, after which they head to Connecticut to take on the undefeated, red-hot Sun.

Moore said Minnesota players know that their roster has several new faces this year, and that they need to come together.

“Nothing just happens,” Moore said. “Just because something happens in the past gives you zero guarantee that it’s going to happen again, and you know that’s life. That’s what we are experiencing and that’s what a new season is all about.”

“We have this group right now in this league at this moment, and all those little things we made look so easy over the years are really hard, and we’re going to have to continue to fight and work and figure out what it looks like for this group right now to get it consistently, and to convert it to wins.” 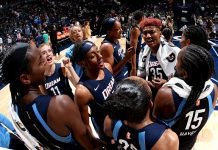 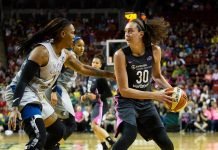 Some good nuggets on a quiet Saturday