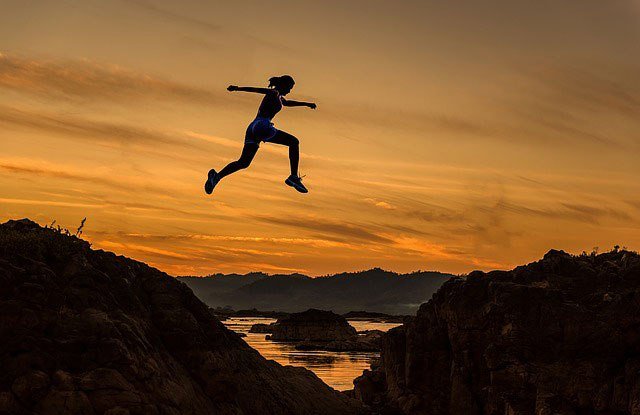 Several years ago I was was having an in-depth conversation with a friend about trials and tribulations, when he laid this on me:

“You’ve been able to get through the hard times and the rough battles that you’ve had because you have that athlete mentality,” my friend said.

This sounds strange, but I hadn’t though of it that way. Even though we’ve all read the studies which show that a high percentage of female executives are former athletes, I didn’t necessarily relate that to myself. But when I contemplated it fully, I realized my friend was correct: being a jock turned me into a warrior.

I was inspired to get into sports after watching college women play basketball in the 1981-1982 season. The day after my team lost in the first round of the inaugural women’s NCAA Tournament, I embarked on what has turned out to be a lifelong athletic career.

I tried running first, and good grief, it was hard. After every run there was a brief period where I thought I’d pass out – or die. But I kept increasing my mileage, little by little, knowing instinctively that by the laws of adaptation, it had to get easier.

After three months I was ready for my first 10K (6.2 miles). I finished, got the T-shirt, was so proud, and my parents took some pictures. Then I went home and took a nap.

I played volleyball and basketball in junior high and high school, and wasn’t particularly good at either one. Track and field, however, proved to be my forte, and I stuck with it. I turned into a speedy little sucker, too, and placed in state as a high school senior.

It is the discipline in the process of training, with a larger goal in mind, that makes an athlete. It’s not that athletes don’t fail; in fact, failure is a constant companion. It is in continuing to go forth and improve, in returning after setbacks, and in pushing through adversity that strengthens not only the body, but the mind and spirit, too.

Humans need a moderate amount of both mental and physical challenge to remain optimally healthy, studies show. In our modern world of convenience, however, many of us have forgotten what it is to be challenged. But athletes haven’t.

A funny thing happens when you’re running a mile along hills that intersperse between a 10 and 15 percent grade, as my team and I did in high school: you get to the end, and you realize you did something you didn’t think you could.

Then the cycle repeats itself a few years down the line when mastering another feat that seemed impossible. Then it happens again. Confidence grows, as does the willingness to try and the fearlessness in the fight. This bleeds over into life.

I put myself through three collegiate degrees by working jobs to make ends meet and pay my own tuition. For a few long years, I taught school in the Watts area of Los Angeles, which was one of the hardest things I’ve ever done. And those are just a few of the challenges I’ve encountered in my decades.

I’m very grateful that I’m an athlete who still runs and works out, because I wouldn’t have been able to make it this far and this well any other way.

Athletes always know who the other athletes are at an older age. I can tell right away when meeting someone new at the gym, or in public, whether or not they are a current or former athlete. It shines in their spirit.

I asked two of my favorite former WNBA players how being an athlete helped them through life, and here’s what they said:

I have always been an athlete as long as I can remember. I grew up in Kingston Jamaica, where children competed in track and field as early as the age of two. I turned to running as a way to distract the bullies to see the beauty of my height through speed so I would be praised and not be teased. My height was my advantage on the track and many other places, but it was also the main reason I was bullied. Then I turned to basketball at 16 to potentially escape poverty, which required much sacrifice. I trained hard in the sweltering sun and had to push through the pain and agony that comes with injuries. Quitting was frowned upon as a deadly weakness, so I learn to fight through every obstacles laid in front of me. I was taught that mental toughness is just as important, or even more important than physical toughness.

This I was taught at a very early age, growing up so even as I was being teased, I knew I had to stay focused and keep my eye on the prize. I couldn’t get too caught up in my emotions for too long. Coming to the America alone at 17 for college was extremely scary, but I was a poor girl who longed for the American dream. Every time I was hit with tough times while isolated, I remembered how hard I worked in the hot Jamaican sun to learn the game. As an athlete you are taught teamwork, resilience, to push beyond your limits and to have a winning mentality. You learn not to get too low over a lost or too high over a win. You have to bounce back the next day ready to compete no matter what the result was the night before.

Now that I am no longer competing as an athlete, I realize how all my trainings, competitions and being an athlete prepared me for life after the game. Adjusting to a world outside of sports has its challenges, but each time I run into a difficult situation I’m able to push through. I am very thankful for the life lessons learned from being an athlete.

It helps you handle defeats and setbacks, and helps you to jump back on the horse. And it does give you the competitiveness: pushing through if stuff isn’t easy, and knowing how to work with people. It gives you a confidence that you’re strong, that you’re powerful, and it teaches you teamwork. So at the end of the day, you know how to work with people, and you know how to get you through good and bad times.

The workload is never an issue, because athletes in general – we don’t mind working. But then there’s teamwork, and understanding the different dynamics and personalities, and how we all fit together and work together. The perseverance of whatever comes your way, you’ve got to make it work. It’s kind of that competitive spirit of “whatever comes your way, let’s go.” How do I fix it, how can I improve? There’s also the ability to take constructive criticism, because we’ve been coached and we’ve been told; we’ve heard the feedback and we’ve taken it.

My father took me to my first women’s basketball games, and for that I’ll be forever grateful, as he shaped the path of my life. I always encourage parents to take their daughters to women’s games, meets and matches so they can see solid role models and know that it’s OK to be strong.

Teachers can also encourage young women to try sports. Sometimes a girl hadn’t considered a sport, or didn’t realize how good she was at an endeavor until she gave it a try.

If a kid is already into sports, it is a coach’s job to provide manageable challenges that sets the young person up for a series of mastery events, if she applies herself. A coach often has more influence on a young person’s life than few others they encounter.

Athletes are the most fortunate people on the planet. Let’s go nurture some more.