So far, 2017 has been a tale of two seasons for the Seattle Storm.

After beginning on a four-game winning streak, including victories over the Washington Mystics and New York Liberty, the Storm were stopped by the hungry Minnesota Lynx. Seattle won their next game, against San Antonio, and seemed to be back on track.

But in their next outing they were clipped by the Indiana Fever, 83-80. Two nights later, the Liberty pounded their young opponents in the last 1:15 of the match up to avenge their earlier loss. Two nights after that, the Atlanta Dream ran over them in overtime to win by 15 points.

Since then, the Storm beat the Stars again and racked up two more losses – one by only three points, to the Phoenix Mercury. In their next match up, the Mystics pounded them, 100-70. Seattle is 6-7 going into tomorrow’s game against the Connecticut Sun, who have an identical record and who also dropped their last two match ups. The Storm and the Sun are tied for eighth in the WNBA standings.

“We lost two games in a row that we should have won, which isn’t to take anything from the other teams, but it hurt us a bit,” Bird said. “The sequence of events, as they were, shook us a little bit.”

Guard Jewell Loyd, in her third year, began the season averaging 24 points per game. She has cooled off to 17.2, but still leads the team in scoring. Second-year forward Breanna Stewart missed the first game with an injury, but is back to her usual scoring and rebounding ways, averaging just slightly under her rookie numbers. Bird was injured the first two games of the season, but since returning has averaged 10.3 points and 7.5 assists per game, up from 5.8 assists last season.

The other two starters – veterans Crystal Langhorne and Alysha Clark – have been putting up solid numbers. But the rest of the Seattle roster features second-year forward Ramu Tokashiki, three rookies and forward Kaleena Mosqueda-Lewis, who has missed nine games after injuring her knee.

“We’re trying to get our footing,” Stewart said. “It’s a long season, but Sue tells us to keep pushing.”

Bird said it’s important for the Storm to learn from their losses.

“We haven’t got back on the right track yet, but we will come around,” Bird said. “We won’t get discouraged. We showed earlier in the season what we are capable of.”

Seattle needs to be ready for every game, according to Bird. And most of all, it’s important to see the big picture.

“You can’t be too dramatic about it,” she said. “The difference between the teams in this league sometimes feels bigger than it is. Sometimes it’s just a few possessions here and there, so you’ve got to keep playing and pushing.”

The Storm-Sun match up, at Mohegan Sun Arena, tips off at 5 p.m. Pacific on ESPN2. 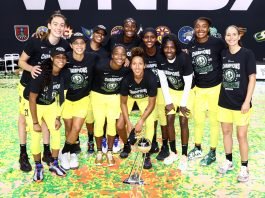 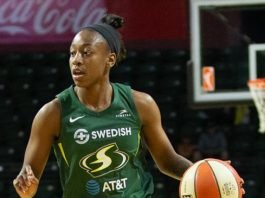 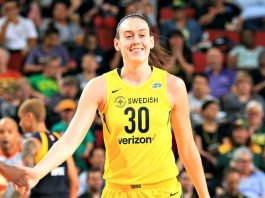