Home Features What retirement? Alana Beard burning up the court in her 12th season

In the Los Angeles Sparks’ first game of the season, Alana Beard dove to the floor to poke the ball away from her opponent and feed it to teammate Odyssey Sims, who scored. Last week Beard jumped into the passing lane to slap the ball from its intended target.

The 12th-year guard looks like an early candidate for all-defensive team, which she has made three of the last five years since she returned to the court in the WNBA. She is averaging a team-high 2.1 steals per game, is the fourth-leading scorer for Los Angeles, and at 35 years of age – the oldest on the team – she is logging the most playing time at just over 32 minutes per outing. As if that weren’t enough, Beard is tops in field goal percentage for the Sparks, shooting 60.3 percent.

But it was just last October that the age-defying former Duke Blue Devil standout was contemplating retirement. Los Angeles coach Brian Agler mentioned it on stage at the team’s WNBA Championship celebration, and the crowd groaned. He promised he’d try to get her to stay.

True to his word, Agler disclosed on Twitter three months later that Beard had decided not to retire just now. In April, she re-signed with the Sparks. Beard said the idea was blown out of proportion.

“Brian and I had conversations, and he knew I was thinking that if we won a Championship, I’d go out on top,” she said. “But nothing was set in stone!”

Agler was in Washington D.C., where Beard lives in the offseason, and they had dinner. He convinced her to return to the team, and she said the next thing she knew he was dropping the news on social media.

“I couldn’t believe it,” said Beard, who admitted she is not one to make public announcements. “If I want to stop playing, I’ll just leave,” she said. “It’s not for anyone to know.”

But Beard said she isn’t necessarily hanging up her shoes anytime soon.

“When the time comes to retire, I will decide,” she said.

If Beard had opted to leave basketball, no one could begrudge her.

She is possibly the best player to ever suit up for Duke, winning Atlantic Coast Conference player of the year three times during her college career and leading the Blue Devils to two Final Fours.

Drafted No. 2 by the Washington Mystics shortly thereafter, Beard was the star of the franchise for six seasons, where she had a double-digit scoring average while adding significant rebounds and assists, too. But in training camp in April, 2010, Beard rolled her ankle while sliding and tore the the posterior tibial tendon, which holds the foot up. It is an unusual injury, and after she had surgery her doctor delivered some stunning news.

“I was told by doctors that I would probably never play again,” Beard said. “They also told the Mystics that.”

She had different ideas.

“I didn’t believe that,” Beard said. “I always knew I would return, and would continue to work towards that. I knew I wouldn’t be the same, but in whatever capacity, I was returning.”

“You hear people saying that you’ll never be the same and you’ll never come back. Those type of things, at that time in my life, motivated me.”

But it was a longer comeback than anyone anticipated. Beard sat for the season and continued a brutal rehab routine, only to re-aggravate the injury that August. She sat out the 2011 season, too. The following winter, when the Mystics didn’t make an offer, Beard signed with the Sparks. It proved to be a good fit.

She hasn’t had a double-figure average since, but Beard does many things on court that don’t show up in the box score, like playing lockdown defense. Lavender said she is very impressed by Beard so far this season, in particular.

“As somebody considering retiring last year – she has so much in her, so much firepower. She just leads the team,” Lavender said. “It’s not just as a veteran leader, but someone who leads by example.”

That example is in her eating regimen, her willingness to try new workouts, and in the way she attacks the game.

“She’s not the most vocal but she leads by example – she leads with her intensity,” Lavender said. “You know when she gets turned up because that’s when she starts talking, and she gets hyped off of steals and gets our team going so much. I don’t think I’ve ever seen anybody as great defensively and as locked in as she is. I just love it.”

Gail Goestenkors coached Beard at Duke and briefly served as an assistant coach with the Sparks a few years ago. She compared Beard to recently-retired great Tamika Catchings, whose signature was always her on-court hustle.

“From day one, Alana only knows one way to play and practice, and that’s all out, all the time, like Tamika Catchings,” Goestenkors said. “It’s not in her DNA to take a practice or a play off. She knows once she gets on her on the court she can’t help herself.”

Beard did have to take several games off during the 2015 season, as she suffered from plantar fasciitis. But after careful rehab in the offseason she came back strong last year and was one of the stars of the Sparks’ amazing season-long show – especially in the WNBA Finals. Her buzzer-beater shot in Game One against the Lynx won the game for Los Angeles, and helped set the tone for the series against heavily-favored Minnesota.

Agler said Beard’s work ethic and leadership make her a role model to everyone on his team.

“I don’t think there’s any question,” he said. “You can ask a lot of the younger players on our team who they look up to, and who they admire, and who’s a great leader. Of the several they may mention, Alana’s probably going to head that list.”

Beard has worked hard physically for this renaissance of her career, but it is her mental growth that got her to where she is now. Her first few years in the WNBA, she said she was “in the gym every single day.”

“I worked my butt off,” she said. “But, thinking back on it, I didn’t work very efficiently. I didn’t know how to work efficiently, and injuries happened.”

The 2017 Beard is happy not to be expected to do it all, on a talented team. That has helped her focus and refine her skills.

“I figured out what I was good at, and locked into that,” Beard said. “When playing on this team, you can’t do everything. I know my role and play it to the best of my ability. It is the most fulfilling thing, to play your role.”

She said she has also put basketball in perspective.

“Basketball is just basketball,” she said. “I don’t stress when we lose, or when I have a bad game. My effort is in my control.”

And like many a veteran before her, Beard has learned to work smarter instead of harder, as well as to conserve her energy as much as possible. Agler assists her in that.

“Sometimes I’ll get upset when he pulls me out of practice, but it’s in my best interest,” she said.

Agler has also watched out for Beard off the court, including last year when he heard she was surfing on her down time. He went online and found a story about Chicago Bulls Center Luc Longley, who separated his shoulder surfing in the same waters two decades earlier. It cost him two months of his season.

“I sent her that article. I didn’t say anything to her, I just sent it to her,” Agler said. “She read it and came and told me she was going to quit surfing until the season was over.”

Off the court, Beard has always had a strong base of support from her family, and is close to both of her parents, and her brother. She said her parents laid a foundation for her and have trusted she would make the right decisions.

“When I was injured, they just treated it like ‘it is what it is,'” Beard said. “They knew I was working to get back, but if I had just walked away, they would have been fine with that.”

Yet, when the Sparks won the Championship, no one was happier for Beard than her mother, Marie.

“Just hearing that release of rejoice from my mom was indescribable,” Beard said. “After all I had gone through, it was never spoken. But when we won, it was like she won, too.”

During individual player portraits with the Championship trophy, Beard had her mother join her, and the image of the two dancing is featured on Beard’s Twitter account profile.

“I know having the support system I do is rare,” Beard said.

Whenever she does decide to leave basketball, Beard already has another career set up: restaurant owner. She and longtime friend and former teammate Marissa Coleman, who plays for the Indiana Fever, opened a Mellow Mushroom Pizza Bakers franchise in Roanoke, Virginia last fall. Opening day was successful, they were told.

“Neither one of us were able to make it,” Coleman said. “Alana was in the WNBA Finals, and I was (playing) overseas already.”

But the confetti from the title celebration had hardly been swept when Beard was headed East to take over restaurant operations. Coleman said her friend became the rock for the restaurant staff, and made sure things ran smoothly.

“She channels her emotions really well, so it wasn’t a shuffle process or anything like that. She did a good job handling everything,” Coleman said.

Once the eatery was up and running, Beard left to play overseas in January. She came back to Los Angeles four months later, ready to go. She was inspired by the thought of continuing after such a compelling 2016 season.

“It’s human nature to always want more, and to want more with this group of women,” Beard said. “It’s something that you just can’t turn down.”

Goestenkors said she is impressed with Beard’s resilience and professionalism.

“She does everything she can do to help herself be the best possible player she can; she’s a pro’s pro,” Goestenkors said. “Whether winning or losing, she’s always a pro.”

And like a pro, Beard is savoring the relationships she has with her teammates, and looks forward to every game.

“This is a once in a lifetime thing when it comes to basketball, so you kind of have to just enjoy it,” she said. “Enjoy the moment, enjoy the people that you have around, especially when you have a special group like we do.” 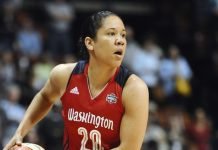 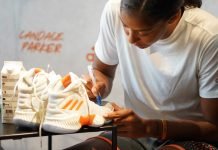 Things are heating up