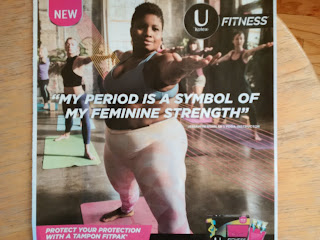 I was knocked out by the advertisement for U Kotex Fitness-brand tampons in today’s paper, above. The ad featured a large-sized, African American woman with the slogan, “My period is a symbol of my feminine strength.”

First, Kotex gets major props for using a more diversified representative of fitness than the standard white woman with no butt. Even more significantly, they’ve reclaimed something that has been used against women: their menstrual cycle. Over the last 20 years, as views of women in America have retreated backwards, the menstrual cycle has been portrayed as a weakness. Kotex turns that on its ear and claims it as a strength. And rightly so.

The menstrual cycle represents the capability of women to bring life into the world. This is an underrated superpower – especially for basketball players and other athletes – who often return to competition fairly soon after giving birth.

Perhaps due to social media and the constant quest for “likes,” America has become a nation of followers. If there’s a popular opinion, people are likely to go with it rather than stick with or hatch their own views. That seems to have influenced WNBA consumption.

San Antonio Stars coach Vickie Johnson made an observation in our interview last week that I have written about before:

Me neither. But as young men have been allowed to join the NBA sooner, and as play in that league has become more acrobatic and less fundamentals-based, popular opinion has become that NBA play is the way the game should be executed. And it does seem like every young female basketball player has plenty of NBA knowledge but understands very little, if anything, about the WNBA.

The secret is, and always has been, that each person decides their values for themselves. Just because someone says being shy is negative, for example, doesn’t mean that you have to think that way. Claim shyness if you’re shy. You can only be shamed if you let yourself be shamed.

Women should not feel badly about being women. Differences with men exist: women have different bodies, different ways of processing information and emotions, and different ways of solving problems. But differences don’t necessarily equate to one being better than the other; that’s merely a value judgement.

Like the recent success of the feature film “Wonder Woman,” this Kotex ad gives me hope. Perhaps a better day lies ahead where women will claim their power and strength and support other women, rather than deferring to defeatist viewpoints and impeding their own progress.