But that time has not yet come for a league that has only now reached the legal drinking age.

“What I’ve always said is, when we have full arenas in all 12 markets, or attendance is increasing, then we will look at expansion,” she said.

Borders’ thoughts on future growth for the league may have been the most revealing comments of a session with the media on Tuesday night in Seattle, with the league head in town for the tip-off of WNBA All-Star voting ahead of the July 22 game at KeyArena.

The biggest difference from years past is the addition of media and player voting to determine the rosters. Fans will now account for 50 percent of the vote, with the two new groups each accounting for a quarter.

“We’ve got 144 of the best players in the world, so they know exactly what it takes to play the game, understand the game, and deliver as an All-Star,” she said. “We think adding those additional dimensions will be helpful to filling out the rosters.”

But, all three groups will be selecting from the rosters of just 12 teams, the same number of franchises the league has had since 2010.

“We want to make sure that everybody is on stable footing in the given markets that we have,” she said. “I’d rather have incremental, sustainable growth than to have a spike. We don’t want to expand too quickly. We will do it slowly and carefully.”

Borders framed that mindset in terms of other professional sports leagues, and their pathways to growth.

“At 21 we’re the youngest, which means we’re more entrepreneurial and more nimble, but we still need time to build our fan base across the country,” she said.

What’s being done in the interim to build that base? Borders noted the league’s streaming partnership with Twitter, a three-year deal to broadcast 20 games a season on the platform.

Of that audience — which has averaged around 950,000 for the first four games this season — approximately 40 percent of viewers were outside the United States.

“That says we are a global game,” she said. “That global footprint is being amplified by what we’re doing on all the platforms, but specifically Twitter.”

That suggestion, she said, came from a conversation with Storm guard Jewell Loyd.

“I didn’t even know that was an option on Twitter,” she said. “She’s young, I don’t know everything about these things. I listen to our players. So, I brought that back to the attorneys at the league, and 56 days later, we had a Twitter deal.”

Borders also touched on the youth of the league when it comes to the midseason departures of players like New York’s Epiphanny Prince and Kia Vaughn, and Chicago’s Courtney Vandersloot for EuroBasket. By the time the NBA turned 21, she said, players had to work two (or even three) jobs to make a living.

“If our players seek to go overseas to help take care of their families, we’re proud of them,” she said. “The day that I get fans in here, and [Storm General Manager] Alisha [Valavanis], and all the other presidents across the country to fill up these arenas, then Alisha can demand that everyone stay here and just play for the WNBA.”

Meanwhile, Seattle will get it’s first shot as All-Star Game host in July, with Borders calling the city a “terrific market,” with a professional sports community that works together.

“That type of cooperation and support demonstrates that women are valued here, the Storm is valued here,” she said. “Women’s basketball, there’s a clear demand for it.” 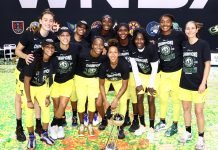 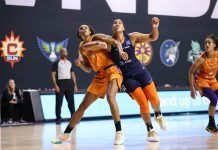 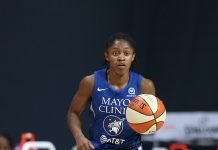 WNBA giving out awards, + the Candace and Shelden story

Catching up with the WNBA